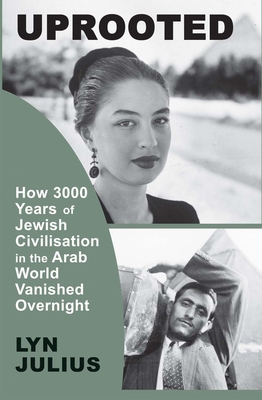 "Lyn Julius provides a riveting account of a fascinating, but disgracefully overlooked subject. Anyone who really wants to understand the Middle East, Israel and world history, should read it." —Tom Gross, former Middle East correspondent, Sunday Telegraph; contributor to The Guardian and The Wall Street Journal

Now available in paperback! Who are the Jews from Arab countries? What were relations with Muslims like? What made Jews leave countries where they had been settled for thousands of years? What lessons can we learn from the mass exodus of minorities from the Middle East? Lyn Julius undertakes to answer all these questions and more in Uprooted, the culmination of ten years of work studying these issues. Jews lived continuously in the Middle East and North Africa for almost 3,000 years. Yet, in just 50 years, their indigenous communities outside Palestine almost totally disappeared as more than 99 percent of the Jewish population fled. Some 650,000—including a minority of ideological Zionists—went to Israel. Before the Holocaust they constituted ten percent of the world's Jewish population, and now over 50 percent of Israel's Jews are refugees from Arab and Muslim countries, or their descendants. This same process is now repeating in Christian and other minority communities across the Middle East. This book assesses how well these Jews have integrated into Israel and how their struggles have been politicized. It charts the growing clamour for recognition, redress and memorialization for these Jewish refugees, and looks at how their cause can contribute to peace and reconciliation between Israel and the Muslim world. [Subject: Middle East Studies, Jewish Studies, History, Sociology, Politics]


Praise For Uprooted: How 3000 Years of Jewish Civilization in the Arab World Vanished Overnight…

"Uprooted will surely not be the last historical examination of the Arab world’s exiled Jews, but it is among the first to launch a frontal assault on the myths and preconceptions associated with their plight. For that alone, its value will endure." —Ben Cohen, Commentary

"In Uprooted: How 3,000 Years of Civilisation in the Arab World Vanished Overnight, Lyn Julius recounts how almost the entire Jewish populations of North Africa and the Middle East were ethnically cleansed, partly in retaliation for the creation of Israel, even though they had been settled for thousands of years." —The Telegraph

"Meanwhile, and whether or not the Trump plan [for the Middle East] ever comes to fruition, the Mizraḥi story deserves telling and retelling. For an engaging treatment, the 2018 book Uprooted by Lyn Julius can serve as a useful introduction." —Emily Benedek, Mosaic
or
Not Currently Available for Direct Purchase
Copyright © 2020 American Booksellers Association