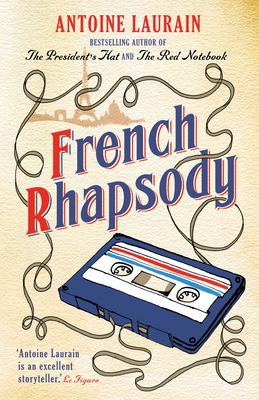 Praise for The Red Notebook:

An endearing love story written in beautifully poetic prose. It is an enthralling mystery about chasing the unknown, the nostalgia for what could have been, and most importantly, the persistence of curiosity.--San Francisco Book Review

Praise for The President's Hat:

Irresistibly whimsical, possessed of wit somewhere between that of Alan Bennett's in The Uncommon Reader and Muriel Barbery's in The Elegance of the Hedgehog, and thoroughly entertaining--The King's English Bookshop, Salt Lake City

Lost in the Paris postal system for decades, the letter from Polydor, dated 1983, offers a recording contract to The Holograms, in which Alain played lead guitar.

Back then The Holograms had believed in their cutting-edge sound. However, the music industry remained indifferent, and eventually the band split up, each going their own way.

Alain is overcome by nostalgia, and is tempted to track down the members of the group. But in a world where everything and everyone has changed . . . where will his quest take him?

Antoine Laurain is a Parisian screenwriter, antiques collector and the author of six novels, three of which are available in English. The President's Hat was a 2013 ABA Indies Introduce choice.