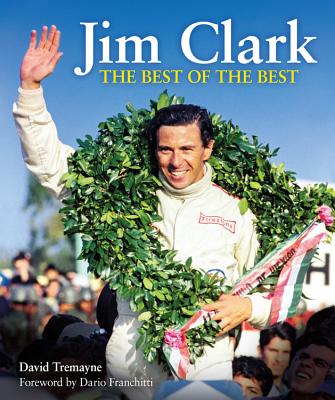 The Best of the Best

Jim Clark was a genuine sporting hero. He won 25 of his 72 Grands Prix and in the sixties was the yardstick by which every other driver on the starting grid was judged, and by which they judged themselves. Quite simply, Clark was peerless. Stubborn and notoriously indecisive outside the car, he would nervously chew his fingernails, but he was a genius when he got behind the wheel. To many he remains the greatest racing driver of all time, not just because of his fearsome strike rate and the magnitude and manner of his achievements, but also because he remained humble and unspoiled throughout. Published on the 50th anniversary of Clark's death, this book, 20 years in the making, is a deeply detailed look at a complex and compelling character.

David Tremayne has spent his career in motorsport journalism, with such notable roles as executive editor of Motoring News, long-time Grand Prix correspondent for The Independent and The Independent on Sunday, and co-founder of GrandPrix+, the sport’s first and fastest e-magazine. He has written over 50 books, including the award-winning Donald Campbell: The Man behind the Mask, a major biography of the speed king. He is a three-times winner of the Guild of Motoring Writers’ ‘Journalist of the Year’ award. In August 2017 he averaged 275mph during a test run prior to challenging the 301mph UK land-speed record, walking away with just a cut knuckle after a crash at 250mph, and vowing to try again.

Dario Franchitti is the 17th driver to win Indy 500 more than once, the first coming in 2007. Dario hails from Bathgate, West Lothian, Scotland, but currently resides in Tennessee.