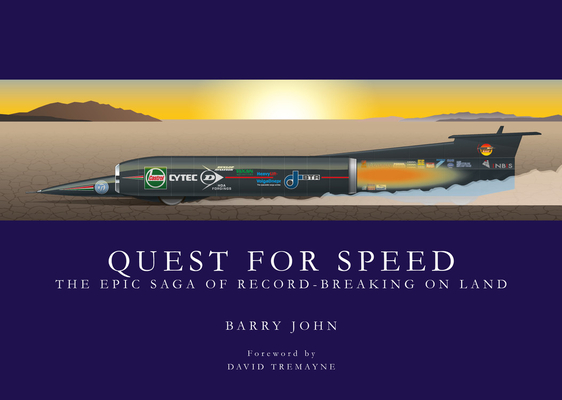 The Epic Saga of Record-Breaking on Land

As Land Speed Record historian David Tremayne states in his foreword, "Quest for Speed is a wonderful book that celebrates passion."

In a remarkable first book, Barry John has celebrated his life-long passion for the quest for speed by writing, illustrating and designing this fascinating history of record-breaking on land. Along with his informed and detailed text, his beautiful artwork shows all significant record-breakers in their immense variety, each illustrated in profile and accompanied by a cameo portrait of its driver. From the start of it all in the late 19th century to today’s challengers seeking to reach "the last frontier," 1,000mph, the story that unfolds will enthrall not only enthusiasts for the subject but anyone appreciative of innovative engineering and brave human endeavour.

Like every boy in the 1950s, Barry John knew the names of Cobb and Campbell and possessed battered Dinky toys of their cars. When he was 15, he discovered Hot Rod magazine and, instantly mesmerised, bought it when pocket money stretched that far. In Hot Rod’s pages he discovered the exploits of Breedlove and Arfons — and has been fascinated ever since. After studying at Harrow School of Art, in London, he pursued a career as a graphic designer. Now retired, he has applied his professional skills to his passion and produced this book. He lives in south-east England.