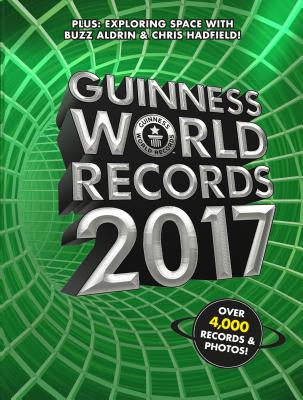 The ultimate annual book of records is back and crammed with more than ever before Guinness World Records 2017 is bursting with all-new records on topics as diverse as black holes, domes, owls, and killer plants. Want to know the highest anyone has travelled on a skateboard, or the largest loop-the-loop completed in a car? Dying to know just how many tricks a cat can do in one minute? The answers to these questions and so much more are right inside.

New in this year's edition are exciting infographic features exploring the fascinating details on topics such as animals, the human body, sports, and explorations. And of course all your favorite record categories are updated for 2017, such as the world's new tallest dog And as ever, our team of world-class photographers have traveled the globe to capture amazing images of the year's most impressive record holders. Let us know your favorite

Do try this at home

Want to be a record-breaker? Inside you ll find challenges you can try in the back yard, in the kitchen, in your bedroom, or even in the gym. Who knows, you may become a world record holder yourself

Bonus content for the US edition
Find exclusive pages just for the USA featuring amazing records from the X Games and a special look at the 125th anniversary of basketball.

GUINNESS WORLD RECORDS (GWR) is the universally recognized global authority on record-breaking achievement. First published in 1955, the annual GUINNESS WORLD RECORDS book has gone on to become one of the best-selling titles of all time, with 2.8 million copies sold in 2013. Since its launch nearly 60 years ago over 132 million copies - and 3 million e-books - have been sold in 20 languages, in more than 100 countries. The internationally renowned brand is also available across a number of platforms; GUINNESS WORLD RECORDS global television shows are watched by over 750 million viewers annually, over half a million subscribe to the GWR YouTube channel, the global website receives 14 million viewers annually and the brand has over 4 million fans on Facebook. In 2013, OFFICIALLY AMAZING became the registered trademark of Guinness World Records Limited.
Loading...
or
Not Currently Available for Direct Purchase