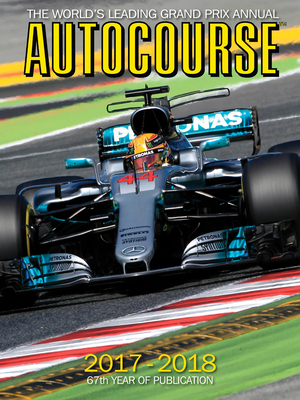 Whilst rivals come and go, The World's Leading Grand Prix Annual continues to be the indisputable leader in its field. Autocourse wraps up the year with the most complete results record supplied anywhere in a single volume. This lavish yearbook is essential reading for all fans of global motorsport.

When the realities of funding a racing career in Lotus Cortinas and Van Diemens became apparent Tony Dodgins opted for the typewriter. He won the Sir William Lyons award for young motoring journalists in 1979 after interviewing Frank Williams at Silverstone the day before Williams won its first grand prix. Tony joined Autosport in 1985 and became their grand prix editor. He has also been the grand prix editor for Motoring News, F1 Racing magazine (now GP Racing), On Track, and has been a regular columnist for Autosport Japan for more than 20 years. He is the editor of the renowned Autocourse yearbook, which has been published since the World Championship began in 1950. After BBC radio work, Tony became the Channel 4 race analyst working on F1 coverage alongside commentator Ben Edwards and now Alex Jacques.

Maurice Hamilton has been part of the Formula One scene since 1977 and was the Observer’s motor racing correspondent for 20 years. He has written more than 20 books as well as commentating on Formula One for BBC Radio. He is now actively involved with the online community on Twitter and writes several blogs whilst continuing to write books about racing.

Mark Hughes is one of the most highly respected and authoritative writers in contemporary motorsport. He combines an acute understanding of present-day Formula One with an intuitive feel for the past. His work appears in a wide variety of magazines, including the UK's Autosport.

Gordon Kirby is one of the world’s most widely-read and respected motor racing writers. He was American editor of Autosport for thirty-two years from 1973-2004 and now serves as the US editor of Motor Sport, the world’s oldest racing magazine. Kirby also writes the annual American season review for Autocourse, starting in 1973, and is the author of an award-winning biography of Mario Andretti, A Driving Passion. Kirby also has written books about the Unser family, Bobby Rahal and Emerson Fittipaldi, and contributed to a book about Greg Moore.