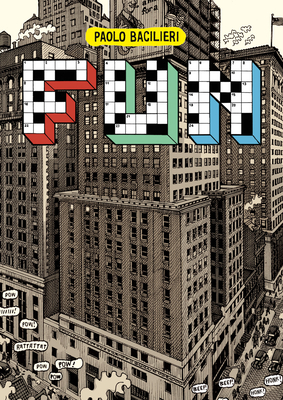 Spies, Puzzle Solvers, and a Century of Crosswords

In December 1913, the New York World newspaper published the first crossword in history. It appeared in their Sunday supplement, “Fun.” A century later, this absorbing puzzle continues to attract (and infuriate) millions of devotees every day. But the world’s most popular—and seemingly mundane—pastime has a surprising history, filled with intrigue and adventure.

Paolo Bacilieri’s FUN transports us from turn-of-the-century New York to present-day Milan, taking in stories of ingenious puzzle makers, ardent solvers, and intellectual luminaries. Part detective story, part docudrama, and interlaced with a fiction of Bacilieri’s own imagining, FUN questions the crossword’s “harmless” status. Sure, it’s fun—but could it also be a form of resistance, of cryptic communication, of espionage?


Praise For FUN: Spies, Puzzle Solvers, and a Century of Crosswords…

"For Bacilieri, playing a crossword is clearly a literary act. Fun will appeal to those who enjoy crossword puzzles and those who appreciate the history of games using word associations."
— Library Journal

"…it’s really the art here that will awe you, with luscious cityscapes and intricate renderings of New York City."
— am New York

“…a whimsical, enjoyable comic that lives up to its title.”
— BookRiot

“Italian artist Paolo Bacilieri delivers the fun, both narratively and visually. Also horizontally and vertically: forget strict linear structure, which is just ho-hum. This Fun is vigorous, spirited and assured in its graphic experimentation.”
— Print Magazine

Born in Verona in 1965, Paolo Bacilieri graduated from the Accademia di Belle Arti in Bologna. His comic book series include Napoleone and Jan Dix. He lives in Milan.
Loading...
or
Not Currently Available for Direct Purchase