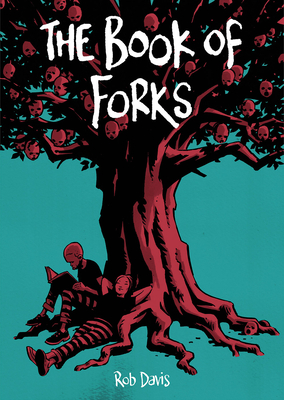 The Book of Forks


The Motherless Ovenand The Can Opener’s Daughtermay have raised more questions than they answered, but The Book of Forks explains everything.

Castro Smith finds himself imprisoned within the mysterious Power Station, writing his Book of Forks while navigating baffling daily meetings with Poly, a troubled young woman who may be his teacher, his doctor, his prison guard . . . or something else entirely. Meanwhile, back home, Vera and Scarper’s search for their missing friend takes them through the chaotic war zone of the Bear Park and into new and terrifying worlds.

With The Book of Forks, Rob Davis completes his abstract adventure trilogy by stepping inside Castro’s disintegrating mind to reveal the truth about the history of the world, the meaning of existence, and the purpose of kitchen scales.


Praise For The Book of Forks…

“… a tour-de-force, illustrating the vast potential of its format.”
— Foreword Reviews, STARRED review