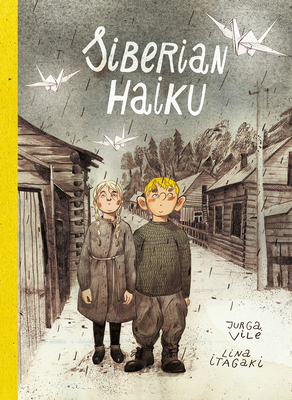 An intense, touching, and informative glimpse into life in exile

One morning in June 1941, a quiet village in Central Lithuania is shaken out of its slumber by the sudden arrival of the Soviet Army. Eight-year-old Algiukas awakes to the sound of Russian soldiers pounding on the door. His family is given 10 minutes to pack up their things. They are not told where they’re going or for how long. An airless freight train carries them from the fertile lands of rural Lithuania to the snowy plains of the Siberian taiga. There, in the distant, dismal North, they begin a life marked by endless hunger and unrelenting cold. And yet the darkness of exile is lightened, for Algiukas, by flights of imagination. Drawing on her father’s exile in Siberia, writer Jurga Vilė brings to light a neglected episode from the history of the Soviet Union. Beautifully drawn by Lina Itagaki, Siberian Haikuuses a child’s perspective to tell an unforgettable story of courage and human endurance.