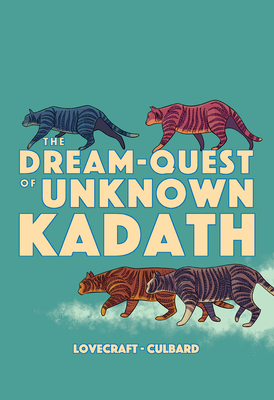 The Dream-Quest Of Unknown Kadath

Obsessed with revisiting the sunset city of his dreams, Randolph Carter leaves the humdrum confines of reality behind, traveling into a vivid dreamworld where anything is possible. But while Carter draws closer to his goal—the mysterious Kadath, home to the gods themselves—another force, dark and brooding, is watching with plans of its own. An epic fantasy mixing adventure, peril, and wonder in equal parts, The Dream-Quest of Unknown Kadath, newly reissued, explores themes of memory and forbidden knowledge through the prism of H.P. Lovecraft’s boundless imagination.

I.N.J. Culbard is an award-winning artist and writer, who has been published by 2000 AD (Brass Sun, Brink), Vertigo (The New Deadwardians), and Dark Horse (Everything). His graphic novels for SelfMadeHero include the British Comic Award–nominated Celeste and At the Mountains of Madness, for which he won the British Fantasy Award in 2011. He lives in Nottinghamshire, England. H.P. Lovecraft (1890–1937) was one of the most influential horror writers of the 20th century.