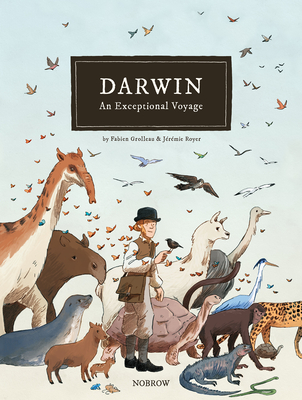 This sweeping, intelligent and immersive biographical graphic novel from award-winning creators, joins legendary scientist Charles Darwin as a young man, as he embarks on his voyage on the H.M.S. Beagle.

It is the year 1831. A gifted but distracted young man named Charles Darwin has been offered a place aboard the H.M.S. Beagle, in a chain of events that will change both his life and the course of modern science. Join him on an epic journey of thrilling discovery as he explores remote corners of the natural world and pieces together the very beginnings of his revolutionary theory of evolution.

Praise For Darwin: An Exceptional Voyage…

"Royer's light-outlined, naturalistic figures in a a subdued palette of natural tones fits nicely the overall subject, especially in the illustrations of Darwin's many collections. A soft introduction to a complex subject and man."
—Booklist

"...imagined in ravishing colour by artist Jeremie Royer . . .  Charles is visibly an eager greenhorn - ecstatic at each new exotic fossil or critter he finds, his eyebrows often flung halfway up his forehead . . . The artists convey social turmoil more intriguingly than scientific discovery, contrasting Edenic visions of the natural world with hellish glimpses of slavery, or mirroring the extinction of ancient species with the genocide of Indigenous peoples that Darwin witnesses."
—The Globe & Mail

Fabien Grolleau has written and created several comics for Vide Cocagne (which he co-founded) as well as the graphic novel, Audubon: On the Wings of the World, which was nominated for in two 2018 Eisner categories for Best Reality-Based Work and Best U.S. Edition of International Material. He lives in France.

Jérémie Royer is an illustrator and designer. After studying art for two years in Nice, he specialized in comic book art and illustration in Brussels. He also illustrated the Eisner nominated Audubon, On the Wings of the World.
Loading...
or
Not Currently Available for Direct Purchase