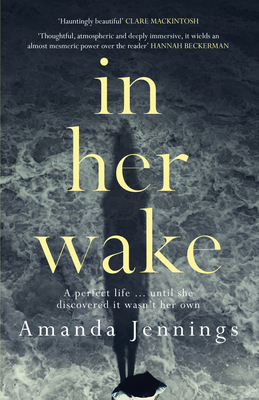 In Her Wake (Paperback)

A perfect life … until she discovered it wasn’t her own.

A tragic family event reveals devastating news that rips apart Bella’s comfortable existence. Embarking on a personal journey to uncover the truth, she faces a series of traumatic discoveries that take her to the ruggedly beautiful Cornish coast, where hidden truths, past betrayals and a 25-year-old mystery threaten not just her identity, but also her life.
Chilling, complex and profoundly moving, In Her Wake is a gripping psychological thriller that questions the nature of family – and reminds us that sometimes the most shocking crimes are committed closest to home.

‘Sworn Secret pulses with real emotion – an intense, relentless story that leaves the reader sated with the author’s imagination’ Vogue

'A gripping concept powers this emotional, sinuous thriller in which one woman’s life is played out against what might have been’ Fanny Blake, Woman & Home

‘This mesmerising & haunting thriller is a true literary beauty.’ Heat

‘Thoughtful, atmospheric and deeply immersive, it wields an almost mesmeric power over the reader’ Hannah Beckerman

‘Enough twists and turns to give you whiplash’ Tammy Cohen

‘A writer of rare and exceptional talent’ Steve Cavanagh

Amanda Jennings made her literary début with the internationally bestselling novel Sworn Secret, which was published in the UK in August 2012. Her second book, The Judas Scar, was published in May 2014, and shortly after was optioned by a film and television production company. In Her Wake, her third, was a WHSmith Fresh Talent pick and will be published in Germany, Sweden, Turkey and Italy. Amanda enjoys appearing at events, is a regular guest on BBC Berkshire’s weekly Book Club, and is a judge for the annual Henley Youth Festival writing competition. She is also involved in the WoMentoring Project, which offers mentoring support for talented female writers with women who work in the literary world. Amanda lives just outside Henley-on-Thames with her husband, three daughters and a varied menagerie. When she isn't writing she can generally be found walking the dog or loitering on Twitter or Instagram.

Praise For In Her Wake…

"Amanda Jennings writes with profound insight into character and a poetic gift for language, exploring chilling themes with lyrical grace. In Her Wake is charged with dark, perfectly observed emotion; a haunting and compelling read." —Iona Grey, author, Letters to the Lost

"Sworn Secret pulses with real emotion—an intense, relentless story that leaves the reader sated with the author’s imagination and distinct characterization. She displays clear understanding and articulation of the most complicated–and simplest–of human emotions."  —Vogue.co.uk

"I LOVED this book. It’s a twisty, clever exploration of identity and growing up, with the shifting sands of what was, is and might have been making it an unsettling read. Amanda writes beautifully and her locations are as gloriously drawn as her tense, biting, messed-up characters." —Elizabeth Haynes

"Atmospheric and moving … deserves to be a bestseller" —C.L. Taylor
or
Not Currently Available for Direct Purchase
Copyright © 2020 American Booksellers Association