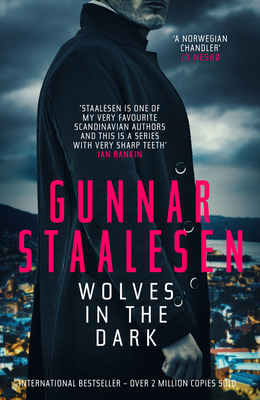 Reeling from the death of his great love, Karin, Varg Veum’s life has descended into a self-destructive spiral of alcohol, lust, grief and blackouts.
When traces of child pornography are found on his computer, he’s accused of being part of a paedophile ring and thrown into a prison cell. There, he struggles to sift through his past to work out who is responsible for planting the material … and who is seeking the ultimate revenge.
When a chance to escape presents itself, Varg finds himself on the run in his hometown of Bergen. With the clock ticking and the police on his tail, Varg takes on his hardest – and most personal – case yet.
Chilling, shocking and exceptionally gripping, Wolves in the Dark reaffirms Gunnar Staalesen as one of the world’s foremost thriller writers.

'There is a world-weary existential sadness that hangs over his central detective. The prose is stripped back and simple … deep emotion bubbling under the surface – the real turmoil of the characters’ lives just under the surface for the reader to intuit, rather than have it spelled out for them’ Doug Johnstone, The Big Issue

'Staalesen's storytelling draws you in and leaves you breathless all the way to the end, and like a fine wine, always leaving you wanting more, but you know you blood pressure could not take it’ Atticus Finch

One of the fathers of the Nordic Noir genre, Gunnar Staalesen was born in Bergen, Norway in 1947. He made his debut at the age of twenty-two with Seasons of Innocence and in 1977 he published the first book in the Varg Veum series. He is the author of over twenty-three titles, which have been published in twenty-six countries and sold over five million copies. Twelve film adaptations of his Varg Veum crime novels have appeared since 2007, starring the popular Norwegian actor Trond Epsen Seim, and a further series is currently being filmed. Staalesen, who has won three Golden Pistols (including the Prize of Honour) and the Petrona Award, and been shortlisted for the CWA Dagger, lives in Bergen with his wife.

Praise For Wolves in the Dark (Varg Veum Series #19)…

"Staalesen follows the hard-boiled PI tradition, as shown by the stunning 18th entry in his series." —Publishers Weekly starred review of Where Roses Never Die

“[S]tellar . . . Staalesen does a masterful job of exposing the worst of Norwegian society.” —Publishers Weekly Online (Starred Review)
or
Buy Here
(This book is on backorder)
Copyright © 2020 American Booksellers Association