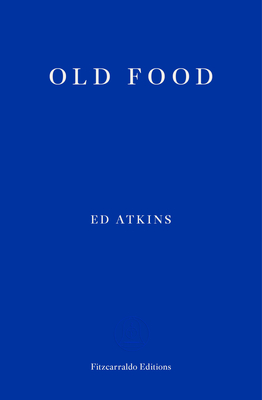 From one of the most lauded artists of his generation comes a purging soliloquy: a profound nowt delivered in some spent afterwards. Scorched by senility and nostalgia, and wracked by all kinds of hunger, Ed Atkins' Old Food lurches from allegory to listicle, from lyric to menu, fetching up a plummeting, idiomatic and crabbed tableau from the cannibalised remains of each form in turn. Written in conjunction with Atkins' exhibition of the same name, Old Food is a hard Brexit, wadded with historicity, melancholy and a bravura kind of stupidity.
Ed Atkins is an artist who makes all kinds of convolutions of self-portraiture. He writes uncomfortably intimate, debunked prophesies; paints travesties; and makes realistic computer generated videos that often feature figures that resemble the artist in the throes of unaccountable psychical crises. Atkins' artificial realism, whether written or animated, pastiches romanticism to get rendered down to a sentimental blubber - all the better to model those bleak feelings often so inexpressible in real life.

Ed Atkins is a British artist based in Berlin. In recent years, he has presented solo shows at the Palais de Tokyo in Paris, Stedelijk Museum in Amsterdam, Serpentine Sackler Gallery in London, and MoMA PS1 in New York, among others. His writing has appeared in October, Texte zur Kunst, frieze, The White Review, Hi Zero and EROS Journal. A Primer for Cadavers, his first collection, was published by Fitzcarraldo Editions in 2016.
Loading...
or support indie stores by buying on