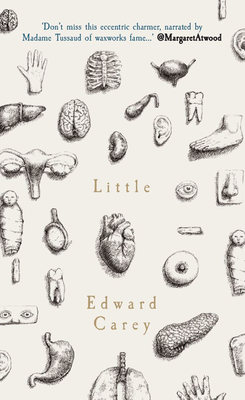 “I am astounded. I am charmed. I am awaiting the manifestation of pure joy this enchanting book will be for the ages. Anne Marie Grosholtz is as tall as the human heart but her outlook is to the moon. Orphaned at a young age, this child is apprenticed to a physician whose wax modeling lends a twist of the macabre and is a precursor to Marie’s wondrous involvement with French royalty, a revolution, and museums. Complete with elucidating illustrations, Little is a bold imagining of Madame Tussaud. To be clear, I love it! I love it! I love it!”
— Jeanette Creager, Mitzi's Books, Rapid City, SD
View the List

LONGLISTED FOR THE INTERNATIONAL DUBLIN LITERARY AWARD 2020 LONGLISTED FOR THE RSL ONDAATJE PRIZE 2019 LONGLISTED FOR THE WALTER SCOTT PRIZE FOR HISTORICAL FICTION 2019 LONGLISTED FOR THE RATHBONES FOLIO PRIZE 2019 SHORTLISTED FOR THE HWA CROWN AWARDS 2019 'A startlingly original novel' -- Times, BOOKS OF THE YEAR There is a space between life and death: it's called waxworks. Born in Alsace in 1761, the unsightly, diminutive Marie Grosholtz is quickly nicknamed 'Little'. Orphaned at the age of six, she finds employmet in Bern, Switzerland, under the charge of reclusive anatomist, Dr Curtius. In time the unlikely pair form an unlikely bond, and together they pursue an unusual passion: the fine art of wax-modelling. Forced to flee their city, the doctor and his prot g e head for the seamy streets of Paris where they open an exhibition hall for their uncanny creations. Though revolution approaches, the curious-minded flock to see the wax heads, eager to scrutinise the faces of royalty and reprobates alike. At 'The Cabinet of Doctor Curtius', heads are made, heads are displayed, and a future is built from wax. From the gutters of pre-revolutionary France to the luxury of the Palace of Versailles, from casting the still-warm heads of The Terror to finding something very like love, Little is the unforgettable story of how a 'bloodstained crumb of a girl' went on to shape the world...
'Don't miss this eccentric charmer' @MargaretAtwood 'Absolutely brilliant' Susan Hill

'Rich and engrossing, there is an extraordinary potency to Carey's material ... A visceral, vivid and moving novel' GUARDIAN

'In this gloriously gruesome imagining of the girlhood of Marie Tussaud, mistress of wax, fleas will bite, rats will run and heads will roll and roll and roll. Guts'n'gore galore: I bloody loved it' SPECTATOR 'A tale as moving as it is macabre' MAIL ON SUNDAY 'One of the most original historical novels of the year... Macabre, funny, touching and oddly life-affirming, Little is a remarkable achievement' SUNDAY TIMES 'Beautifully published... poignant... absorbing' LITERARY REVIEW 'Clever and intriguing' DAILY MAIL

'Marie's story is fascinating in itself, but Carey's talent makes her journey a thing of wonder' NEW YORK TIMES

'By turns witty, ghoulish, poignant and curiously life-affirming, Little is a historical novel unlike any other' BBC HISTORY MAGAZINE

'It is Carey's uniquely inventive style that makes this novel so completely, wickedly, addictive' BIG ISSUE 'Edward Carey is one of the strangest writers we are privileged to have in this country' OBSERVER 'Carey creates an indelible character in Little, sprinkles idiosyncratic drawings throughout and folds his narrative in cunning ways...' BBC 'Full of rich historical detail and beautiful illustrations ... a rare treat of a novel that will stay with you long after you turn the final page' HEAT 'Compulsively readable: so canny and weird and surfeited with the reality of human capacity and ingenuity that I am stymied for comparison. Dickens and David Lynch? Defoe meets Atwood? Judge for yourself...' Gregory Maguire, author of WICKED

Edward Carey was born in Norfolk, England. He is a novelist, visual artist and has also written and directed a number of plays for the National Theatre of Romania and the Vilnius Small State Theatre, Lithuania. In England his plays and adaptations have been performed at the Young Vic Studio, the Battersea Arts Centre, and the Royal Opera House Studio. He is the author of the novels Observatory Mansions, Alva and Irva, and the acclaimed YA series The Iremonger Trilogy, which has been published in thirteen countries and has been optioned for film adaptation. After university, Edward worked at Madame Tussaud in London, preventing people from touching the waxworks, and it was there that he learnt the incredible story of the museum's founder. Edward lives in Austin, Texas in the United States, and teaches at the University of Austin. He is available for interview and to write features.
Loading...
or support indie stores by buying on