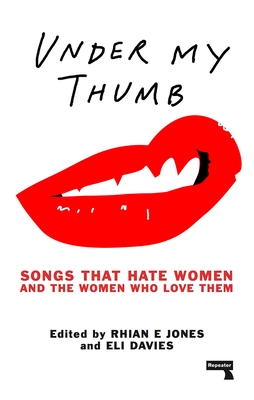 Songs That Hate Women and the Women Who Love Them

In the majority of mainstream writing and discussions on music, women appear purely in relation to men as muses, groupies or fangirls, with our own experiences, ideas and arguments dismissed or ignored. But this hasn’t stopped generations of women from loving, being moved by and critically appreciating music, even – and sometimes especially – when we feel we shouldn’t.

Under My Thumb: Songs that Hate Women and the Women Who Love Them is a study of misogyny in music through the eyes of women. It brings together stories from journalists, critics, musicians and fans about artists or songs we love (or used to love) despite their questionable or troubling gender politics, and looks at how these issues interact with race, class and sexuality. As much celebration as critique, this collection explores the joys, tensions, contradictions and complexities of women loving music – however that music may feel about them.

Praise For Under My Thumb: Songs That Hate Women and the Women Who Love Them…

"Broad and interesting…a necessary and enlightening read." --The Wire

Rhian E. Jones is former editor of New Left Project and author of Clampdown: Pop-Cultural Wars on Class and Gender and Petticoat Heroes. She writes for various publications including The Guardian, Los Angeles Review of Books and The Morning Star.


Eli Davies is a writer, researcher and former editor of New Left Project. She has written on music, politics, popular culture and literature for the Guardian, Noisey, the Quietus and New Statesman.
Loading...
or
Not Currently Available for Direct Purchase