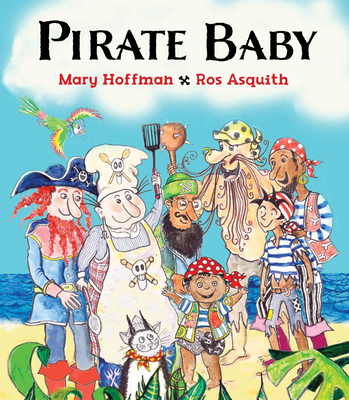 "Shiver me timbers," said the Captain. "It's a baby " When the crew of pirate ship Ramshackle find a tiny baby adrift on the high seas, they are a bit flummoxed. Even more so, when they discover it's a baby girl. The adventures that follow in this rollicking tale are full of laughter and surprises, as the pirates sew nappies, make baby clothes out of pirate shirts and even a toy squid out of pirate gloves for the new arrival. The pirates won't give up their baby - not even to the women pirates who pass close by. And when a huge sea monster appears, it's baby Isla who saves the day, to become a true Pirate Baby.

Mary Hoffman is one of Britain's best-known and best-selling children's writers, with over ninety books to her credit, including the famous Amazing Grace series, now celebrating its 25 anniversary. Mary is esteemed as a writer who looks beyond traditional boundaries to give children both inspiration and aspiration. Ros Asquith is a world-famous illustrator and cartoonist, as well as being a writer and poet. She has been a Guardian cartoonist for 20 years and has written and illustrated over 60 books for young people including the bestselling Teenage Worrier series. She really likes pirates, babies and monsters, so illustrating this story has been fun all the way.
or
Not Currently Available for Direct Purchase
Copyright © 2020 American Booksellers Association