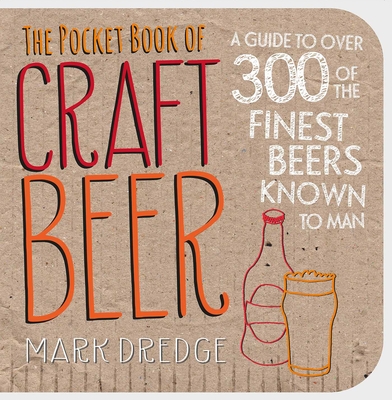 Covering more than 50 different beer styles, The Pocket Book of Craft Beer cracks open the finest, most innovative brews on the planet, making it a must-have for any beer lover.

Covering more than 50 different beer styles, The Pocket Book of Craft Beer cracks open the finest, most innovative brews on the planet, making it a must-have for any beer lover.

The last few years have seen an explosion in the popularity of craft beers across the globe, with excellent new brews being produced everywhere from Copenhagen to Colorado, Amsterdam to Auckland. With more amazing beers available than ever before, it’s hard to know which one to choose. That’s where The Pocket Book of Craft Beer comes in. Gathering together over 300 of the most innovative and tastiest beers you need to try, and divided into 50 different categories, you will find the best of the best each style has to offer. Every category comes with an explanation of the key characteristics of the style—whether it’s an American IPA bursting with citrusy C-hops or an Imperial Stout full of dark roasted malts—along with an example of a classic brew and a selection of cutting-edge versions that are certain to become instant favorites. So whether you’re looking for bitter beers or balanced flavors, a hit of hops or a hint of coffee, the reviews will point you in the right direction to find the perfect beer to suit your tastebuds. Also included throughout the book are interesting nuggets of beer information, covering topics such as the catalyst that has caused the astonishing growth in craft beer and the difference between Stout and Porter.

Mark Dredge is an award-winning beer, food, and travel writer from London, England. In 2011, 2013, and 2014, he was awarded Beer and Food Writer of the Year from the British Guild of Beer Writers for the work on his blog Pencil and Spoon and then his first two books, Craft Beer World and Beer and Food, which also won an award from the North American Guild of Beer Writers. Mark has also written The Best Beer in the World, Cooking with Beer, and The Beer Bucket List for Dog 'n' Bone, and his writing has featured in leading publications across the globe; he’s also an international beer judge. You can follow him on Twitter and Instagram: @MarkDredge.
or
Not Currently Available for Direct Purchase
Copyright © 2020 American Booksellers Association