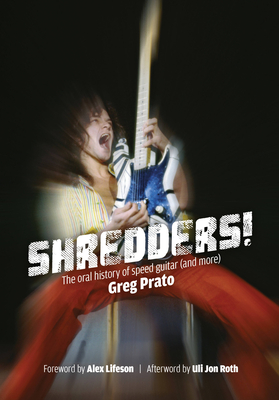 The Oral History Of Speed Guitar (And More)

"How fast can you play?"

"What guitar do you have?"

"Who is better, Van Halen or Steve Vai?"

For metal fans in the 80s, these were common and important questions. Tune in to MTV, pick up a magazine, or walk into an instrument store, and more often than not you'd be exposed to what is now known as shredding - the fast, virtuoso soloing popularized by musicians like Vai and Van Halen, Joe Satriani and Yngwie Malmsteen, Randy Rhoads and Dimebag Darrell. Inspired by these pioneering guitarists, thousands of young musicians would spend hours at home in their bedrooms, perfecting both their playing and their poses.

Though shredding fell out of favor during the grunge/alternative rock era, it has become increasingly popular again in recent years, spurred by the rise in popularity of bands like Children Of Bodom, DragonForce, and Trivium. Drawing on more than 70 exclusive interviews with key shredders past and present, author and guitarist Greg Prato has assembled the definitive guide to the fastest players of them all.


Praise For Shredders!: The Oral History Of Speed Guitar (And More)…

Drawing on more than 70 exclusive interviews with the principal shredders past and present, author and guitarist Greg Prato has assembled the definitive guide to the fastest players of them all.—All That Shreds

Greg Prato is a writer and journalist from Long Island, New York, whose writing has appeared in such renowned publications as Rolling Stone, Classic Rock, and Vintage Guitar. He is also the author of several popular books, including Shredders! The Oral History Of Speed Guitar (And More), Grunge Is Dead: The Oral History Of Seattle Rock Music, and The Eric Carr Story. And you may even have heard him on one of his many radio or TV appearances, which include interviews on The Howard Stern Wrap-Up Show, Eddie Trunk Live, and The Ron & Fez Show.

Alex Lifeson is a Canadian guitarist best known for his work with the band Rush, with whom he was inducted into the Rock and Roll Hall of Fame in 2013. He is also included on Rolling Stone and Guitar World magazines’ lists of the greatest guitarists of all time.

Uli Jon Roth is a German guitarist best known for his work with Scorpions and Electric Sun. He has also recorded a number of solo and classical works, and is the inventor of his own line of customized "Sky Guitar" Stratocasters.