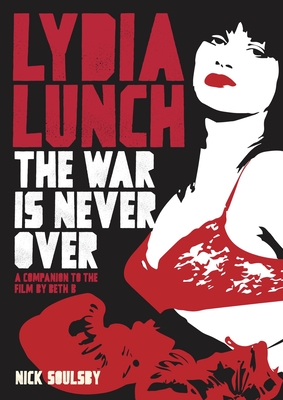 The War Is Never Over: A Companion To The Film By Beth B

Before #MeToo, before Riot Grrl, there was Lydia Lunch. A central figure in the No Wave scene of the seventies—as founder of the seminal Teenage Jesus & The Jerks—Lunch has pursued a four-decade-long career turning the substance of her life into unapologetic, stark, and beautiful art.

From the eighties onward, Lunch became a lone voice publicly calling out the patriarchal aggression and day-to-day violence enacted by the powerful—and never gave a good goddamn whether you wanted to hear it or not. Refusing to be silenced, she took to stages the world over, fearlessly speaking the truth, whether of her own life with its legacy of parental abuse, her wild times owning the streets of New York City, or the world she saw around her.

Seeing no boundaries between creative mediums, Lydia has enacted her vision through music, spoken word, film, theatre, and more. Released as an accompaniment to Beth B’s new documentary The War Is Never Over, this book is the first comprehensive overview of Lunch’s creative campaign of resistance, a celebration of pleasure as the ultimate act of rebellion.

Across these pages, Lunch and her numerous collaborators—including Thurston Moore, Jim Sclavunos, Kid Congo Powers, Bob Bert, Richard Kern, Nick Zedd, and Vivienne Dick—recount life at the front line of the musical extremes of the seventies and eighties underground, the wild times, the disciplined productivity, life lived as a defender of the voiceless, and an unapologetic force of righteous fury.

Nick Soulsby is the author of Swans: Sacrifice And Transcendence (2018), Thurston Moore: We Sing A New Language (2017), Cobain On Cobain: Interviews & Encounters (2016), I Found My Friends: The Oral History Of Nirvana (2015), and Dark Slivers: Seeing Nirvana In The Shards Of Incesticide (2012). In 2014 he curated the compilation No Seattle: Forgotten Sounds Of The North West Grunge Era 1986–1997 with Soul Jazz Records, and he also wrote the oral history of the band Fire Ants for the reissue of their 1993 EP Stripped.


Praise For Lydia Lunch: The War Is Never Over: A Companion To The Film By Beth B…