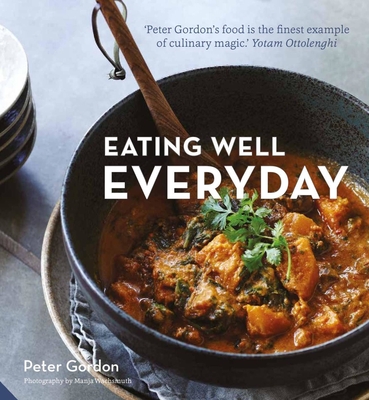 "Peter Gordon is a hospitality legend... This book was first published in 2012 and it's great to see it appear again, as it's clever, delicious recipes are for dishes that we all truly want to eat.  His warm tone of voice and quiet authority just prove what an inspiration he has been."
- CODE magazine—-

Eating Well Everyday is a delight of a book, with recipes that are accessible to the regular home cook. Lots of the recipes give a nod to Peter’s love of Asia but there are European dishes, too. Many of the recipes would actually work well with your regular roast dinners – this is a mix-and-match style of book. The reader will quickly come up with their own preferred combinations.
- Mostly Food & Travel Journal—-

I have loved Peter Gordon’s food since I was a wee young thing - and that is a very, very long time ago! (Well, maybe not quite that young, as I believe I am older than him!) Everything in his restaurants or his books has the particular mark of his genius: a mixture of exuberant culinary curiosity, essential generosity and a bold but sensitively attuned palate.
- Nigella Lawson—-

Peter Gordon is heralded as the Godfather of Fusion food and came to the culinary world's attention as the founding chef of The Sugar Club restaurants in Wellington, New Zealand in 1986, followed by two British incarnations in London's Notting Hill and West Soho.  In 2001 he opened The Providores and Tapa Room Restaurant on Marylebone High Street with three friends. In 2004, he set up Dine by Peter Gordon restaurant in the SKYCITY Grand Hotel in Auckland NZ, soon followed by Bellota tapas bar in 2006. In 2013 he opened the 4th, and current The Sugar Club on the 53rd floor of Auckland’s Sky Tower.  He is a co-founder of Crosstown doughnuts - perhaps London's most loved doughnuts.  Peter has self-authored eight books and writes regularly for The New Zealand Herald.