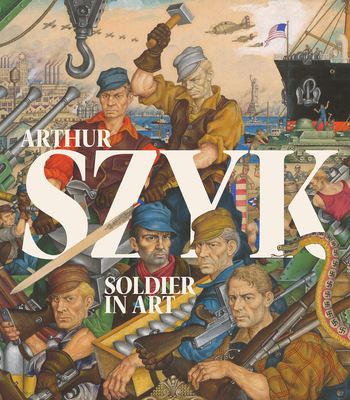 This is an indispensable publication on the life and work of the great Polish-Jewish-American artist-activist Arthur Szyk. A master of miniature painting and calligraphy, Szyk (1894-1951) brought his unmistakable style to subjects as diverse as biblical stories, literary classics, and political cartoons. This powerful, striking book is one for all art enthusiasts and collectors, students of World War II and Holocaust history, and the art world in general, as well as a vital tool for educators.

Irvin Ungar is the curator of The Arthur Szyk Society in Burlingame, CA.

Michael Berenbaum is director of the Sigi Ziering Institute at the American Jewish University in Los Angeles, CA.

Steven Heller is the author of The Daily Heller.

James Kettlewell is an art historian.

Irvin Ungar, a former pulpit rabbi and antiquarian bookseller, has devoted the past quarter-century to scholarship on Arthur Szyk. He has curated and consulted for numerous Szyk exhibitions, including the Fine Arts Museums of San Francisco, the Deutsches Historisches Museum (Berlin), the United States Holocaust Memorial Museum, and the Library of Congress. Ungar is the author of Justice Illuminated: The Art of Arthur Szyk, co-producer of the documentary film, "Soldier in Art: Arthur Szyk," and the creator and publisher of the luxury limited edition of The Szyk Haggadah. He also serves as the curator of The Arthur Szyk Society in Burlingame, California. Michael Berenbaum, PhD, is Director of the Sigi Ziering Institute at the American Jewish University and a Professor of Jewish Studies. He is the former Project Director overseeing the creation of the United States Holocaust Memorial Museum and the former President of the Survivors of the Shoah Visual History Foundation. The author and editor of twenty-two books, Berenbaum was Executive Editor of the Second Edition of the Encyclopedia Judaica, which ran 16 million words in twenty-two volumes. His work in film has won Academy Awards and Emmy Awards. He consults on the creation of museums as well as documentary films. Tom L. Freudenheim is an art historian and retired museum director, who served as Assistant Secretary for Museums at the Smithsonian Institution. A graduate of Harvard College and the Institute of Fine Arts, New York University, he has also been director of the Baltimore Museum of Art, Worcester Art Museum, and the Rosalinde and Arthur Gilbert Collection in London, as well as deputy director and COO of the Jewish Museum Berlin. Freudenheim has been Chair and President of the American Federation of Arts and the Foundation for Jewish Culture, and has served on numerous other boards. He writes about museums and art for the Wall Street Journal and other publications. Steven Heller is the co-chair of the MFA Design / Designer As Author + Entrepreneur Program at the School of Visual Arts, New York City. The author or editor of more than 170 books on graphic design, illustration, and satiric art, he is author of The Daily Heller for Print magazine. For over thirty years he was art director of The New York Times Book Review. James Kettlewell received his BA and MA from Harvard College before continuing his studies with the prestigious Paul J. Sachs Museum Course. He was a Fulbright research scholar, studying at the Courtauld Institute of the University of London. Professor Kettlewell has taught at Harvard College, University of Toronto, and Skidmore College. He was curator of the Hyde Collection in Glens Falls, New York, and has arranged numerous art exhibitions. He has published in many areas of art history and is a consultant both in the museum field and in the attribution and evaluation of works of art.
Loading...
or support indie stores by buying on