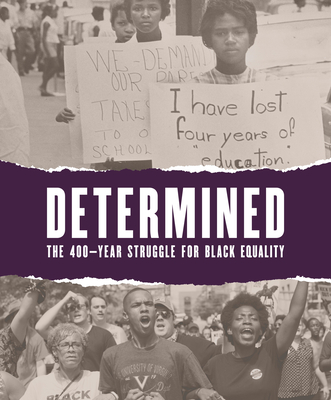 The 400-Year Struggle for Black Equality

Determined presents a concise overview of Black history in Virginia from the arrival of the first enslaved Africans in Virginia in 1619 through the groundswell of racial justice protests of 2020. These four centuries encompass slavery and emancipation, segregation and the civil rights movement, the election of the first Black president and the rise of Black Lives Matter. Throughout this complex history, Black people have fought for freedom, justice, and opportunity and against oppression, discrimination, and dehumanization. Their efforts have brought meaningful changes to American society by forcing the nation to define the meaning of its highest ideals of democracy and universal equality.

Arranged chronologically, this book explores 400 years of Black history through the stories of key figures and events in Virginia that shaped the fight for Black equity. A few of the individuals featured include John Punch, whose punishment for attempting to escape bondage in 1640 began the codification of a system of slavery that spread throughout the original Thirteen Colonies, and Nat Turner, who shocked the nation with a slave revolt in 1831 that challenged the institution of slavery. John Mitchell, Jr. was a journalist-editor who championed Black pride and civil rights in the Jim Crow era, and Barbara Johns led a student protest that became part of Brown v. Board of Education (1954), the landmark Supreme Court decision dismantling legalized segregation. A new generation of activists like Zyahna Bryant continues the fight for racial equity today. Illustrations of historical artifacts and images bring to life these and other stories of Black determination and resistance.

Determined focuses on Virginia, yet it tells an American story. Black people have shaped the nation's economic, political, and cultural identity, and Virginia has played a formative and central role in national race relations. This book provides a timely reckoning with America's fraught history with race and systemic racism. It fosters a greater understanding of the legacies of slavery, segregation, and white supremacy to meet the challenges of today and forge a better tomorrow.

Dr. Karen Sherry is a curator specializing in American history and material culture with 20 years of museum experience. Since 2017, she has served as a curator at the Virginia Museum of History & Culture (Virginia Historical Society), where she organized the exhibitions Determined: The 400-Year Struggle for Black Equality and Agents of Change: Female Activism in Virginia from Women's Suffrage to Today. The Rev. Grady W. Powell, a native of Brunswick County, Virginia, has had a varied career in education and the professional ministry. Along with his brief teaching career, he has served as pastor of rural and urban churches. His most extensive pastoral work was in Petersburg, Virginia, at the historic Gillfield Baptist Church, where he retired after thirty-six years of service. He has also worked on national and state boards, including the Virginia Historical Society, for twenty years and has been active in civil rights causes since his college days and an active participant in improving racial harmony among all groups. Advisory CommitteeDr. Edward L. Ayers, Tucker-Boatwright Professor of the Humanities and President Emeritus, University of Richmond Victor K. Branch is senior vice president, Richmond Market President, Bank of AmericaRev. Benjamin P. Campbell is pastor emeritus, Richmond Hill and Pastoral Associate, St. Paul's Episcopal Church (Richmond)Dr. Elizabeth Clark-Lewis is professor of History, Howard UniversityDr. Spencer R. Crew is Clarence J. Robinson Professor of History, George Mason UniversityDr. Claudrena N. Harold is professor and department chair, Corcoran Department of History, University of Virginia Dr. Julian Maxwell Hayter is associate professor of Leadership Studies, University of RichmondDr. James Horn is president and CO, Jamestown Rediscovery FoundationDelegate Delores L. McQuinn, Virginia House of Delegates Dr. Cassandra L. Newby-Alexander, is the dean, College of Liberal Arts, Norfolk State UniversityJustin G. Reid is director of African American Programs, Virginia HumanitiesDr. Susan P. Schoelwer is executive director of Historic Preservation and Collections and Robert H. Smith Senior Curator, George Washington's Mount Vernon
Loading...
or support indie stores by buying on