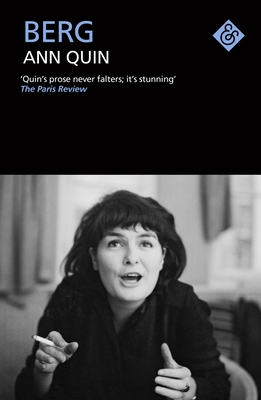 "A man called Berg, who changed his name to Greb, came to a seaside town intending to kill his father. . ."

So begins Ann Quin's madcap frolic with sinister undertones, a debut "so staggeringly superior to most you'll never forget it" (The Guardian). Alistair Berg hears where his father, who has been absent from his life since his infancy, is living. Without revealing his identity, Berg takes a room next to the one where his father and father's mistress are lodging and he starts to plot his father's elimination. Seduction and violence follow, though not quite as Berg intends, with Quin lending the proceedings a delightful absurdist humor.

Anarchic, heady, dark, Berg is Quin's masterpiece, a classic of post-war avant-garde British writing, and now finally back in print after much demand.

Ann Quin (b. 1936) was a British writer from Brighton. She was prominent amongst a group of British experimental writers of the 1960s, which included B.S. Johnson. Prior to her death in 1973, she published four novels: Berg (1964), Three (1966), Passages (1969), and Tripticks (1972). A collection of short stories and fragments, The Unmapped Country (edited by Jennifer Hodgson) was published by And Other Stories in 2018.
Loading...
or support indie stores by buying on