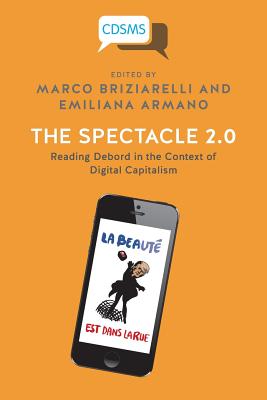 Reading Debord in the Context of Digital Capitalism

The Spectacle 2.0 recasts Debord's theory of spectacle within the frame of 21st century digital capitalism. It offers a reassessment of Debord's original notion of Spectacle from the late 1960s, of its posterior revisitation in the 1990s, and it presents a reinterpretation of the concept within the scenario of contemporary informational capitalism and more specifically of digital and media labour. It is argued that the Spectacle 2.0 form operates as the interactive network that links through one singular (but contradictory) language and various imaginaries, uniting diverse productive contexts such as logistics, finance, new media and urbanism. Spectacle 2.0 thus colonizes most spheres of social life by processes of commodification, exploitation and reification. Diverse contributors consider the topic within the book's two main sections: Part I conceptualizes and historicizes the Spectacle in the context of informational capitalism; contributions in Part II offer empirical cases that historicise the Spectacle in relation to the present (and recent past) showing how a Spectacle 2.0 approach can illuminate and deconstruct specific aspects of contemporary social reality. All contributions included in this book rework the category of the Spectacle to present a stimulating compendium of theoretical critical literature in the fields of media and labour studies. In the era of the gig-economy, highly mediated content and President Trump, Debord's concept is arguably more relevant than ever.