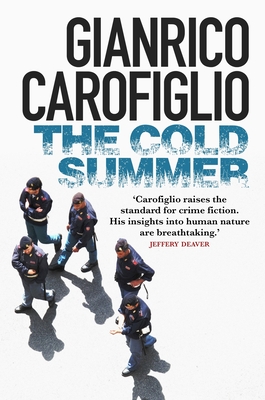 The summer of 1992 had been exceptionally cold in southern Italy. But that's not the reason why it is still remembered.

On May 23, 1992, a roadside explosion killed the Palermo judge Giovanni Falcone, his wife and three police officers. A few weeks later judge Paolo Borsellino and five police officers were killed in the center of Palermo. These anti-mafia judges became heroes but the violence spread to the region of Bari in Puglia, where we meet a new, memorable character, Maresciallo Pietro Fenoglio, an officer of the Italian Carabinieri.

Fenoglio, recently abandoned by his wife, must simultaneously deal with his personal crisis and the new gang wars raging around Bari. The police are stymied until a gang member, accused of killing a child, decides to collaborate, revealing the inner workings and the rules governing organised crime in the area.

The story is narrated through the actual testimony of the informant, a trope reminiscent of verbatim theatre which Carofiglio, an ex-anti-mafia judge himself, uses to great effect. The gangs are stopped but the mystery of the boy's murder must still be solved, leading Fenoglio into a world of deep moral ambiguity, where the prosecutors are hard to distinguish from the prosecuted.

Gianrico Carofiglio was born in Bari in 1961 and has worked for many years as a prosecutor specialized in organized crime. He was appointed advisor of the anti-Mafia committee in the Italian parliament in 2007 and has served as senator from 2008 to 2013. He is the author of the novels featuring the character of defense lawyer Guido Guerrieri: A Walk in the Dark, 2003, Temporary Perfections, 2010, A Fine Line, 2014. He was awarded the Premio Gargano Vincenzo Afferrante in 2015, and the Premio Letterario Castelfiorentino in 2016. Carofiglio's multi-award winner books have sold four million and five hundred thousand copies in Italy and have been translated or are going to be translated into 27 languages worldwide.
Loading...
or support indie stores by buying on