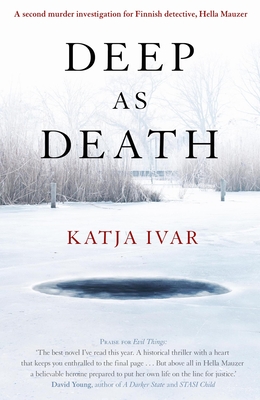 This is Helsinki, March 1953. An unusually long and cold winter, everywhere frozen sea, ice-covered lakes and rivers. In a port city flooded with refugees, who cares if a young woman goes missing? An up-and-coming inspector who views this as an opportunity to advance his career. A heartbroken PI with a score to settle. They have yet to discover one thing: the most dangerous lies are those we tell ourselves.

It all begins when Nellie, a prostitute working in a high-end brothel is found floating upside down in Helsinki Harbor. Not exactly a high priority case for the Helsinki police, so homicide chief Jokela passes the job to his former colleague Hella. It's beginning to look like a serial killer is at work when Elena, another lady of the night, narrowly escapes being driven into the harbor by her 19-year-old john. Problem was he had handcuffed her in the car. And to add further excitement to Hella's life, the madam is soon found dead in the garden outside the brothel.

What begins like a taut whodunit turns into something more tantalizing and psychological as Hella investigates different suspects, including Steve, the US DJ and love of her life, reluctant to leave his wife for Hella, and the fascinating Inspector Mustonen, charismatic, ambitious and trying desperately to live up to the standards of his high maintenance wife.

There are dark powers at play, as well as lighter passages, particularly those involving Anita, voluptuous but savvy, freshly arrived from Lapland to join the Helsinki police force, a most unwanted roommate for Hella. Sadly she too ends up in deep trouble, in a satisfying denouement of twists and turns.