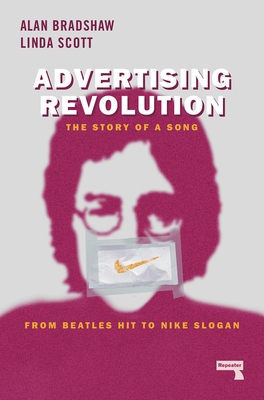 The Story of a Song, from Beatles Hit to Nike Slogan

The story of "Revolution" by the Beatles, from its origin as a protest song of the 1960s, to it becoming the musical backdrop for one of the most famous, influential, and controversial adverts of all time.

In 1987, Nike released their new sixty-second commercial for Air shoes—and changed the face of the advertising industry. Set to the song “Revolution” by the Beatles, the commercial was the first and only advert ever to feature an original recording of the FaUb Four. It sparked a chain of events that would transform the art of branding, the sanctity of pop music, the perception of advertisers in popular culture, and John Lennon’s place in the leftist imagination.

Advertising Revolution traces the song “Revolution” from its origins in the social turmoil of the Sixties, through its controversial use in the Nike ad, to its status today as a right-wing anthem and part of Donald Trump’s campaign set list. Along the way, the book unfolds the story of how we came to think of Nike as the big bad wolf of soulless corporations, and how the Beatles got their name as the quintessential musicians of independent integrity. To what degree are each of these reputations deserved? How ruthlessly cynical was the process behind the Nike ad? And how wholesomely uncommercial was John Lennon’s writing of the song?

Throughout the book, Alan Bradshaw and Linda Scott complicate our notions of commercialism and fandom, making the case for a reading of advertisements that takes into account the many overlapping intentions behind what we see onscreen. Challenging the narratives of the evil-genius ad conglomerate and the pure-intentioned artist, they argue that we can only begin to read adverts productively when we strip away the industry’s mysticism and approach advertisers and artists alike as real, flawed, differentiated human beings.

Professor Linda Scott is the Emeritus DP World Chair for Entrepreneurship and Innovation at Saïd Business School, University of Oxford.  She writes a blog called The Double X Economy, as well as blogging for the World Economic Forum, Forbes, and Bloomberg Businessweek on gender issues, she also served as Editor for the Advertising and Society Review for eleven years.
Loading...
or
Not Currently Available for Direct Purchase