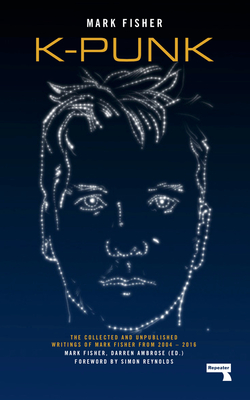 The Collected and Unpublished Writings of Mark Fisher

A comprehensive collection of the writings of Mark Fisher (1968-2017), whose work defined critical writing for a generation.

This comprehensive collection brings together the work of acclaimed blogger, writer, political activist and lecturer Mark Fisher (aka k-punk). Covering the period 2004 - 2016, the collection will include some of the best writings from his seminal blog k-punk; a selection of his brilliantly insightful film, television and music reviews; his key writings on politics, activism, precarity, hauntology, mental health and popular modernism for numerous websites and magazines; his final unfinished introduction to his planned work on "Acid Communism"; and a number of important interviews from the last decade. Edited by Darren Ambrose and with a foreword by Simon Reynolds.

Praise For K-punk: The Collected and Unpublished Writings of Mark Fisher…

“Fisher is the most trusted navigator of these times out of joint.”
- David Peace

"A more interesting British writer has not appeared in this century."
— Irish Times

"A primer in how to write cultural criticism in the 21st century."
- LA Review of Books

Mark Fisher is the author of Capitalist Realism, Ghosts of My Life and The Weird and the Eerie. He also blogged at k-punk.abstractdynamics.org and wrote regularly for other publications including the Guardian, the Wire, and New Statesmen. He was a Visiting Fellow in the Visual Cultures department at Goldsmiths, University of London.
Loading...
or support indie stores by buying on