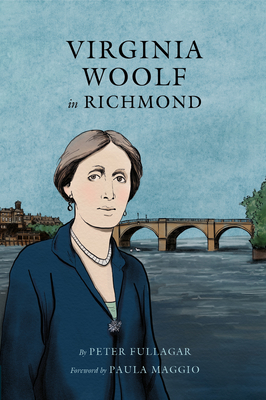 "I ought to be grateful to Richmond & Hogarth, and indeed, whether it's my invincible optimism or not, I am grateful." - Virginia Woolf

Although more commonly associated with Bloomsbury, Virginia and her husband Leonard Woolf lived in Richmond-upon-Thames for ten years from the time of the First World War (1914-1924). Refuting the common misconception that she disliked the town, this book explores her daily habits as well as her intimate thoughts while living at the pretty house she came to love - Hogarth House. Drawing on information from her many letters and diaries, the editor reveals how Richmond's relaxed way of life came to influence the writer, from her experimentation as a novelist to her work with her husband and the Hogarth Press, from her relationships with her servants to her many famous visitors.

Richmond was the place that Leonard and Virginia set up a hand printing press on their dining room table and in 1917, they began their self-publishing venture known as The Hogarth Press. They printed the first edition of TS Eliot's 'The Wasteland' there and went on to publish EM Forster, Katharine Mansfield and many others. Virginia worked with Leonard in the publishing business until 1930.

Also while in Richmond, Virginia had her first novel published: 'The Voyage Out' and she wrote many essays and short stories there such as 'Monday and Tuesday', 'Kew Gardens' and 'The Common Reader'. She also published her second novel, 'Night and Day' in 1919 then 'Jacob's Room' in 1922 during her time in the town. She wrote much of 'Mrs Dalloway' while living in Richmond, affected by the sight of the many war wounded who were convalescing in the town.

One of the reasons that may have led to the couple's decision to settle in Richmond was the proximity of the private nursing home, Burley House, in Twickenham. Virginia spent three short periods taking a 'rest cure' in 1910, 1912, and 1913, there.

Peter Fullagar is a former English Language teacher, having lived and worked in diverse locations such as Tokyo and Moscow. He became fascinated by the works of Virginia Woolf while writing his dissertation Reading the Writing of the Self: A Text World Theory Account of Self-Writing in the Diaries of Virginia Woolf for his Masters in English Literature and Language. During his teaching career he was head of department at a private college in West London. He has written articles and book reviews for the magazine English Teaching Professional and is the editor of Next Generation Magazine. Peter was recently interviewed for the forthcoming film about the project to fund, create and install a new full-sized bronze statue of Virginia Woolf in Richmond-upon-Thames.
Loading...
or support indie stores by buying on