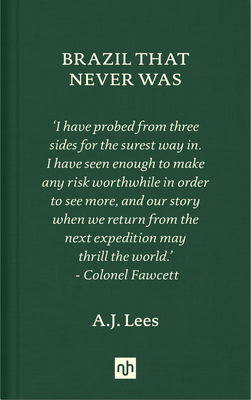 Brazil That Never Was

A famed British neurologist embarks on an expedition in Brazil to follow the trail of Percy Fawcett, an occult-obsessed explorer who went missing in the Amazon rainforest and was the subject of the 2016 film The Lost City of Z.

As a boy growing up near Liverpool in the 1950s, Andrew Lees would visit the docks with his father to watch the ships from Brazil unload their exotic cargo of coffee, cotton bales, molasses, and cocoa. One day, his father gave him a dog-eared book called Exploration Fawcett. The book told the true story of Lieutenant Colonel Percy Fawcett, a British explorer who in 1925 had gone in search of a lost city in the Amazon and never returned. The riveting story of Fawcett's encounters with deadly animals and hostile tribes, his mission to discover an Atlantean civilization, and the many who lost their own lives when they went in search of him inspired the young Lees to believe that there were still earthly places where one could "fall off the edge."

Years later, after becoming a successful neurologist, Lees set off in search of the mysterious figure of Fawcett. What he found exceeded his wildest imaginings. With access to the cache of "Secret Papers," Lees discovered that Fawcett's quest was far stranger than searching for a lost city. There was a "greater mission," one that involved the occult and a belief in a community of evolved beings living in a hidden parallel plane in the Mato Grosso.

Lees traveled to Manaus in Fawcett's footsteps. After a time-bending psychedelic experience in the forest, he understood that his yearning for the imaginary Brazil of his boyhood, like Fawcett's search for an earthly paradise, was a nostalgia for what never was. Part travelogue, part memoir, Lees paints a portrait of an elusive Brazil, and of a flawed explorer whose doomed mission ruined lives.

Praise For Brazil That Never Was…

"A. J. Lees’s new book Brazil That Never Was is an engaging treasure, urgent in its message, thrilling in its telling. His masterful tale marries the grandeur of the natural historian with the passion of the outlier poet. Like the physician Arthur Conan Doyle, and friend and fellow neurologist Oliver Sacks, Lees is a detective, tracking the mysteries of the human mind....We follow two journeys: Colonel Percy Harrison Fawcett’s and Lees’s own...Lees’s eloquent tale urges: support Native peoples, protect other species, help win this battle. For soon the real tropical cornucopia of Brazil will likely be lost, as if it never was." —Kathelin Gray, Los Angeles Review of Books

“This is a book about daydreams, melancholy and nostalgia in the very best sense. It is also a dramatic travelogue, from boyhood fantasy about an imagined Brazil to its flawed but life-transforming reality. It is a poetic meditation on time past and present, beautifully written and expertly composed.” —Andrew Hussey

“This book is about the quest for a place that, like the mythical Lake Parima on ancient maps of South America, is only an illusion. Following in the maddening footsteps of the lost explorer Percy Harrison Fawcett, Andrew Lees explores his own life, and his longing for the deepest places of the mind and the remotest places on Earth. The trip is beautiful even if, in the end, that place is nowhere to be found.” —Héctor Abad

“What begins as a personal reflection on the western world's endless fascination with Amazonia and its mysteries, develops in a most unexpected way, as Andrew Lees' prose becomes our Virgil, taking the reader for a leap into the unknown, way further than any other expedition has ever dreamed of.” —Ciro Guerra, director of the Academy Award–nominated Embrace of the Serpent

“Reality is no match, it seems, for the rapture of existence conveyed in a long-ago book. Dr. Lees’s own writing can be such an exercise in enthrallment. . . . sentences in Dr. Lees’s elegy for vanished youth flare up and shimmer with revelation, like lost arrowheads upturned by the plow.” —Danny Heitman, The Wall Street Journal

A.J. Lees is a professor of neurology at the National Hospital, London. He is the author of several books, including Mentored by a Madman: The William Burroughs Experiment, published by Notting Hill Editions.
Loading...
or support indie stores by buying on