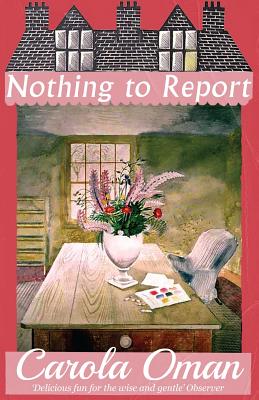 "I have told Rose that there will be a chauffeur for dinner," she ended, frowning slightly at the cannibalistic sound of her sentence.

Unmarried and nicknamed "Button" by her friends, Mary Morrison is a (very mildly) distressed gentlewoman. She no longer lives in her family home, but remains at the very centre of village life, surrounded by friends including carefree, irresponsible Catha, Lady Rollo, just back from India and setting up lavish housekeeping nearby with her husband and children--socialist Tony, perfect Crispin, and Elizabeth who's preparing to be presented at Court. Then there's Marcelle, Mary's widowed sister-in-law, and her challenging daughter Rosemary, who may soon be planting themselves with her to escape London bombs, Miss Rosanna Masquerier, a historical novelist who might just be a wry self-portrait of the author, and an array of other Sirs and Ladies who rely on Mary's sympathy and practicality. And perhaps there's just a hint of romance as well . . .

Known for her bestselling historical fiction, in Nothing to Report Carola Oman delightfully evokes E.M. Delafield's Provincial Lady in her portrayal of an English village cheerfully, hilariously, and sometimes bumpily progressing from obliviousness to the war's approach to pulling together for king and country. Dean Street Press and Furrowed Middlebrow have also reprinted Oman's Somewhere in England, a sequel to Nothing to Report.