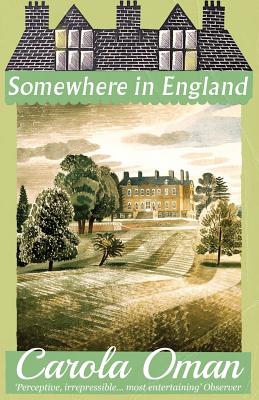 "At any rate," ended Philippa-Dawn, staring up at the garland of silver monsters gently swaying above them in the evening sky, "at any rate, it'll be a change of Balloons."

Carola Oman's irresistible sequel to Nothing to Report begins with young, perky Philippa-Dawn Johnson, preparing to launch her nursing career at Woodside, the country home now overseen as a hospital by none other than the redoubtable Mary Morrison. Pippa soon encounters other faces familiar to readers of the earlier novel, including Mrs. Bates, whose debilitating rheumatism has been suddenly cured by Hitler, the Dowager Lady Merle, who is "the living image of Elizabeth Tudor in later life", and the redoubtable historical novelist (and alter-ego of Oman herself?) Rosanna Masquerier, doing war work and encountering bombs with her usual flair.

Set in the thick of World War II, Somewhere in England traces Oman's charming and eccentric village characters through unforgettable new muddles, romances, and hilarities on the Home Front. Dean Street Press and Furrowed Middlebrow have also reprinted Nothing to Report.

"Delicious fun for the wise and gentle everywhere." Observer