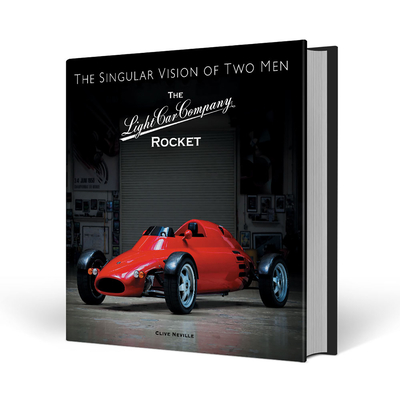 The Singular Vision of Two Men

The Light Car Company Rocket was the brainchild of former racing driver Chris Craft and design genius Gordon Murray, who relentlessly chased his goal of building the lightest production road car of all time.

Starting with a clean sheet of paper, Murray’s unique creation made extensive use of bespoke components and was crammed with the technological brilliance for which he’s renowned. Today, it has a cult following and is recognised by die-hard enthusiasts and the motoring cognoscenti as being a landmark achievement in sports car history. Written by Rocket owner Clive Neville and designed by Rick Ward – the man who originally penned the car’s badge and all of its publicity material – this book tells the full history of a fascinating car.

Rocket owner Clive Neville was educated at a middle-ranking public school that also gave us Radiohead and David Mitchell (in contemporary times, at least), but he didn’t do quite as well. While not marked out for outstanding academic success, he has nevertheless had a reasonably competent career as a Civil Servant. A keen motorcyclist, he has a particular enthusiasm for Yamahas. The Light Car Company Rocket is his first book and putting it together has been a decade-long labour of love.

Rick Ward designed the Rocket badge and the car’s original publicity material. Born in Zimbabwe, he studied in South Africa and the UK, then worked for leading design companies in the UK, Europe and South Africa before founding his own. His passion for design and books led him to co-author the definitive work on fairground art, and he also designed Driving Ambition, which told the story of the McLaren F1.