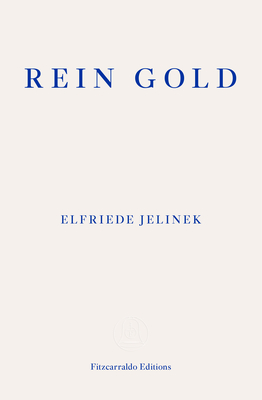 Originally written as a libretto for the Berlin State Opera, Elfriede Jelinek's rein GOLD reconstructs the events of Wagner's epic Ring cycle and extends them into the present day. Br nnhilde diagnoses Wotan, father of the gods, to be a victim of capitalism because he, too, has fallen into the trap of wanting to own a castle he cannot afford. In a series of monologues, Br nnhilde and Wotan chart the evolution of capitalism from the Nibelungen Saga to the 2008 financial crisis. Written with her trademark 'extraordinary linguistic zeal' (Swedish Academy), rein GOLD is a playful and ferocious critique of universal greed by the 2004 Nobel Prize in Literature laureate.

Elfriede Jelinek, who was born in 1946 and grew up in Vienna, now lives in Vienna and Munich. She has received numerous awards for her literary works, which include not only novels but also plays, poetry, essays, translations, radio plays, screenplays and opera librettos. Her awards include the Georg Buchner Prize and the Franz Kafka Prize for Literature. She was awarded the Nobel Prize in Literature in 2004 for her 'musical flow of voices and counter-voices in novels and plays that, with extraordinary linguistic zeal, reveal the absurdity of society's cliches and their subjugating power'.
Loading...
or support indie stores by buying on