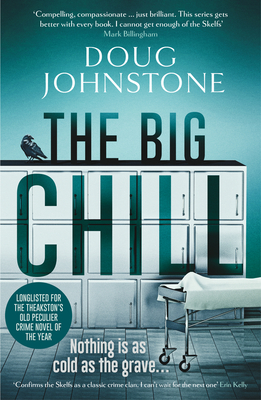 Running private-investigator and funeral-home businesses means trouble is never far away, and the Skelf women take on their most perplexing, chilling cases yet in Book Two of the darkly funny, devastatingly tense and addictive Skelfs series!

***Longlisted for Theakston’s Old Peculier Crime Novel of the Year***

‘Compelling, compassionate … just brilliant. This series gets better with every book. I cannot get enough of the Skelfs’ Mark Billingham

‘Confirms the Skelfs as a classic crime clan. I can’t wait for the next one’ Erin Kelly

‘I LOVE the Skelfs … The only problem with The Big Chill is that you’ll devour it so fast you’ll feel as bereft as one of the Skelfs’ clients. Doug Johnstone has murdered sleep’ Val McDermid

Haunted by their past, the Skelf women are hoping for a quieter life. But running both a funeral directors’ and a private investigation business means trouble is never far away, and when a car crashes into the open grave at a funeral that matriarch Dorothy is conducting, she can’t help looking into the dead driver’s shadowy life.

While Dorothy uncovers a dark truth at the heart of Edinburgh society, her daughter Jenny and granddaughter Hannah have their own struggles. Jenny’s ex-husband Craig is making plans that could shatter the Skelf women’s lives, and the increasingly obsessive Hannah has formed a friendship with an elderly professor that is fast turning deadly.

But something even more sinister emerges when a drumming student of Dorothy’s disappears and suspicion falls on her parents. The Skelf women find themselves sucked into an unbearable darkness – but could the real threat be to themselves?

Following three women as they deal with the dead, help the living and find out who they are in the process, The Big Chill follows A Dark Matter, book one in the Skelfs series, which reboots the classic PI novel while asking the big existential questions, all with a big dose of pitch-black humour.

‘Exceptional … Johnstone seamlessly presents their stories with depth, elegance, and a delicate touch of wry humor as they get difficult jobs done with grace and kindness. This is a must for those seeking strong, authentic, intelligent female protagonists’ Publishers Weekly

‘Johnstone’s intuitive depiction of this trinity of resilient women is never less than flawless, in this tale punctuated by emotional depth and moments of dark humour...’ Raven Crime Reads

Praise for The Skelfs series

‘This enjoyable mystery is also a touching and often funny portrayal of grief, as the three tough but tender main characters pick up the pieces and carry on: more, please’ Guardian

‘They are all wonderful characters: flawed, funny, brave and well set up for a series. I wouldn’t call him cosy, but there’s warmth to Johnstone’s writing’ Sunday Times

"A fiendish mystery that is also deeply moving and laced with suitably dark humour. The start of a must-read series." —Mark Billingham, author, Lazybones

"Showcases a writer at the peak of his powers, except that with every book, Doug Johnstone just gets better." —Val McDermid, author, A Darker Domain

"I was addicted from the first page; gripping, gritty and darkly funny as hell." —Erin Kelly, author, He Said/She Said

"A new series from the criminally underrated Johnstone. His warm portrait of the tough, indomitable Skelf women is gripping and blackly humorous." —Observer

"Flawed, funny, brave—and well set up for a series. I wouldn’t call him cosy, but there’s warmth to Johnstone’s writing." —Sunday Times

"'This enjoyable mystery is also a touching and often funny portrayal of grief, as the three tough but tender main characters pick up the pieces and carry on: more, please." —Guardian

“This is a must for those seeking strong, authentic, intelligent female protagonists.”—Publishers Weekly, starred review

Doug Johnstone is the author of 11 novels, most recently A Dark Matter, the first in the Skelfs series, which has just been optioned for TV. In 2019 his thriller Breakers was shortlisted for the McIlvanney Prize for Scottish Crime Novel of the Year. Several of his books have been bestsellers and award winners, and his work has been praised by the likes of Val McDermid, Irvine Welsh, and Ian Rankin. He’s taught creative writing and been writer in residence at various institutions, and has been an arts journalist for 20 years. Doug is a songwriter and musician with five albums and three EPs released, and he plays drums for the Fun Lovin’ Crime Writers, a band of crime writers. He’s also player-manager of the Scotland Writers Football Club. He lives in Edinburgh.
Loading...
or support indie stores by buying on