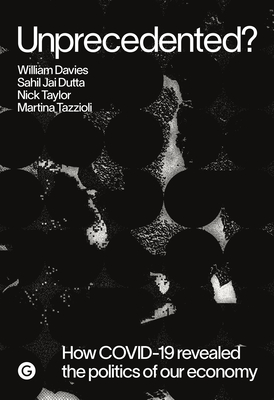 A critical and evidence-based account of the COVID-19 pandemic as a political–economic rupture, exposing underlying power struggles and social injustices.

The dawn of the COVID-19 pandemic represented an exceptional interruption in the routines of work, financial markets, movement across borders and education. The policies introduced in response were said to be unprecedented—but the distribution of risks and rewards was anything but. While asset-owners, outsourcers, platforms and those in spacious homes prospered, others faced new hardships and dangers.

Unprecedented? explores the events of 2020-21, as they afflicted the UK economy, as a means to grasp the underlying dynamics of contemporary capitalism, which are too often obscured from view. It traces the political and cultural contours of a "rentier nationalism," that was lurking prior to the pandemic, but was accelerated and illuminated by COVID-19. But it also pinpoints the contradictions and weaknesses of this capitalist model, and the new sources of opposition that it meets.

An empirical, accessible and critical analysis of the COVID economy, Unprecedented? is essential reading for anyone seeking to understand the political and economic turbulence of the pandemic’s first eighteen months.

William Davies is a Professor in Political Economy at Goldsmiths, where he is Director of the Political Economy Research Centre. He is author of This is Not Normal: The Collapse of Liberal Britain, Nervous States: How Feeling Took over the World, The Happiness Industry: How the Government and Big Business Sold Us Wellbeing, and The Limits of Neoliberalism: Authority, Sovereignty and the Logic of Competition. He writes regularly for The Guardian and London Review of Books.

Sahil Jai Dutta is Lecturer in Political Economy at Goldsmiths and a member of the Political Economy Research Centre. His research focuses on British political economy, ﬁnancialization, sovereign debt and public sector reform. He has published in Review of International Political Economy, the IPPR's Progressive Review, Tribune, and OpenDemocracy.

Nick Taylor is Lecturer in Political Economy and Deputy Director of the Political Economy Research Centre at Goldsmiths. He researches and publishes on unemployment and welfare as well as on the political economy of green finance. His work has appeared in Area, Journal of Cultural Economy, and Capital & Class.

Martina Tazzioli is Lecturer in Politics & Technology at Goldsmiths. She is the author of The Making of Migration: The Biopoltics of Mobility at Europe’s Borders, Spaces of Governmentality, and Tunisia as a Revolutionised Space of Migration. She is co-editor of Foucault and the History of our Present and Foucault and the Making of Subjects. She sits on the editorial board of Radical Philosophy and is an associate editor of Politics.
Loading...
or support indie stores by buying on