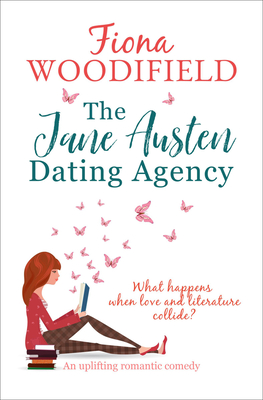 An overworked and underpaid fashion-magazine employee hunts for her own Mr. Darcy in this tale with "some wonderful surprises" (Austenprose).

Sophie Johnson is young, intelligent, and attractive. So when she lands the dream position of Sales Executive at a leading fashion magazine, it appears she has it all. But in reality, she hates her job, is sick of her controlling mother, and her love life is a disaster.

Then she discovers The Jane Austen Dating Agency, an exclusive club for ladies who want to meet real gentlemen--and she believes her luck has changed. And when Sophie meets Darcy Drummond, she thinks her dreams have come true. That is until she discovers how arrogant and hard-headed he is.

When Daniel Becks steps into her life, she thinks she's found the one this time. But is he really all he seems? The Jane Austen Dating Agency is a fast, funny, heartwarming read for anyone who's wondered if true romance only exists in fiction.

As a young child, Fiona spent hours reading, curling up with a book was one of her favourite past times. Her current volume would accompany her everywhere, to school, on daytrips, holidays and visits. The idea of providing an imaginary world in which others can escape is a wonderful one and this became Fiona's dream, to become a published author. From an early age, Fiona's parents encouraged her writing - commencing when they gave her a simple red lined exercise book. Soon she had a collection of notebooks, small, large, plain, The Snowman, Brambly Hedge, they all became full of her jottings. Years later, Fiona studied for a Combined Arts Degree at Durham, then a Masters in English - writing her thesis on Jane Austen and Masculinity. In total contrast she went to work for a top fashion magazine in London, then various marketing posts. Four lovely daughters later, during which time she has graduated from laughing at Mrs Bennet to sympathising with her, she continued to scribble away, only the notebooks are somewhat bigger. Fiona has written for national magazines on diverse subjects from Jane Austen to caravanning! One morning the idea came to her for 'The Jane Austen Dating Agency' and this was the first book she just had to write. Fiona obviously loves writing, especially romantic comedy, meeting with friends and family, dancing, walks by the sea and escaping into a book whilst consuming a worrying amount of chocolate.
Loading...
or support indie stores by buying on