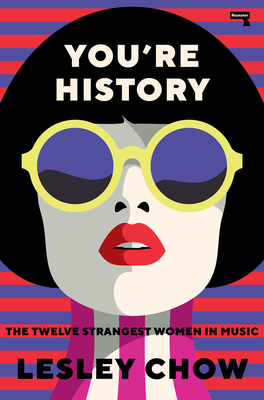 The Twelve Strangest Women in Music

From Kate Bush to Nicki Minaj, from Janet Jackson to TLC and Taylor Swift, pop's greatest female pioneers are simply strange: smashing notions of taste and decorum, and replacing them with new ideals of pleasure.

Instead of rehashing biographies, Lesley Chow dives deep into the music of these groundbreaking performers, identifying the ecstatic moments in their songs and finding out what makes them unique.

You're History is a love letter to pop's most singular achievements, celebrating the innovations of women who are still critically underrated. It's a ride that includes tributes to Chaka Khan, Rihanna, Neneh Cherry, Sade, Shakespears Sister, Azealia Banks, and many more...

“The slim, sharp book considers a range of female artists from Janet Jackson and Taylor Swift to TLC and Nicki Minaj, a group that the Australian cultural critic Chow views as ‘outliers, marking moments where the culture might have swerved to incorporate their influence, but somehow contrived not to.’” — New York Times summer reads

Praise For You're History: The Twelve Strangest Women in Music…

"Lesley Chow is the best and rarest kind of critic—one who loves to be surprised, and can always surprise you in turn… The emphasis is firmly on aesthetic pleasure, and the book itself is a unique pleasure to read: joyful, witty, knowledgeable, intensely observant, and indifferent to received ideas." - Jake Wilson, arts critic for The Age and author of Mad Dog Morgan

"By embracing pop's sonic artifice, its vocal textures and its wordless moments of rapture – too often ignored by other critics – Lesley Chow constructs a new version of pop history. Her assemblage of pop's 'hybrid girls' and wayward women is a sly, original analysis." - Anwen Crawford, music writer for The Monthly and author of Hole: Live Through This

“Lesley Chow's sparklingly written book is full of whip-smart wit and electric prose. You're History isn't just a work of great criticism: it will make you rethink your understanding of pop music and the strange, sublime sounds of its creators.” - Luke Buckmaster, The Guardian

“Lesley Chow explores the alchemy of pop that comes from breath, sound and lyrics. Her deep dive into these extraordinary women made me feel their music all over again.” - Julia Zemiro, actor and presenter of RocKwiz

“A pure hit of prose pleasure. The writing embodies the polemic, which is refreshing at a time when music criticism has never been so virtuous and so inattentive to the bliss that is pop’s greatest gift.” – Simon Reynolds, 4Columns

“In You’re History, Chow recommends an alternative criticism, driven by curiosity, puzzlement and enjoyment of music without the need to fully explain it.” – Rhian E. Jones, Red Pepper

Lesley Chow is an Australian writer on music and film. She is associate editor of the journal Bright Lights and has published widely over the past eighteen years, in Salon, Times Literary Supplement, The Quietus, The Age, Pop Matters, and CNN. She has appeared on numerous film juries including Venice and Berlin, and was President of the Critics' Jury at the Toronto International Film Festival in 2018.
Loading...
or support indie stores by buying on