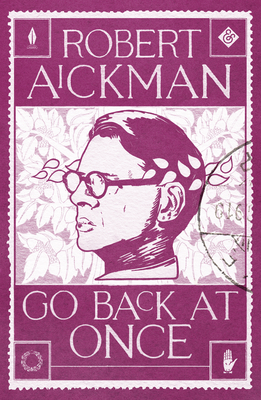 Go Back at Once

Completed by Robert Aickman in 1975, but never before published in the US and not widely in the UK, Go Back at Once is a delicious, delirious comic fantasy about the joys and terrors of a life devoted to resisting the degradations of our technological and conformist age. It tells the story of Cressida Hazeborough and her friend Vivien, two cuttingly intelligent young women in a misty, inter-war Britain. The pair have little patience for the company of the marriageable men they are meant to endure, yet neither do they possess the means to live as they might wish: together, and apart from the demands of modern society. What's a girl to do?

Having left school and taken the sorts of London job available to women of their age and station, remarkable arrives: a great foreign poet, playwright, athlete, and soldier named Virgilio Vittore has successfully conquered the tiny country of Trino, on the Adriatic Sea, and is now governing it "according to the laws of music." Could this new utopia be a refuge for Cressida and Vivien, and indeed all who seek a life less ordinary? Or should the women, having arrived in this chaotic land, where love, life, and politics must submit to the rules of the beautiful, take to heart the advice of the novel's title?

Snobbish yet humane, reactionary yet camp, strait-laced yet queer, personal yet theatrical, old-fashioned yet radical, Go Back at Once reveals Robert Aickman as a master not only of the "strange story," but a romantic pessimist of the first order, deserving of a place beside the works of Evelyn Waugh, Anthony Powell, or even Edward Gorey.

Robert Aickman (1914-1981) was the son of an architect and grandson of the Victorian Gothic novelist Richard Marsh. A novelist, critic, editor, memoirist, activist, and literary agent, he produced more than fifty 'strange stories' over his lifetime, and edited eight volumes of The Fontana Book of Great Ghost Stories. He is credited with almost singlehandedly moving such tales beyond their gothic or antiquary origins and into our modern era of surreal comedy and disquieting neurosis. He is regularly acclaimed as the most singular and accomplished writer of supernatural fiction in the twentieth century.
Loading...
or support indie stores by buying on