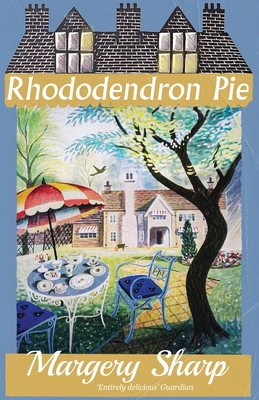 It was indeed very difficult for the Laventie children not to be a little priggish.

Ann Laventie, the youngest of three children in a long line of anti-social Sussex gentry, doesn't quite fit the mould of her intellectual, elegant, ultra-modern siblings Dick, an artist, and Elizabeth, a high-brow writer. Their father is scholarly and just wealthy enough to focus all his attention on reading and other highbrow pursuits. Ann, on the other hand, worries about being plump, is what might be called a 'people person, ' and appreciates the simpler pleasures. As the young Laventies spend more and more of their time in the glitter of London, their differences grow more pronounced, and when Ann returns home with an unsuitably ordinary fianc , this dazzling, witty battle of the brows reaches its exhilarating climax.

Rhododendron Pie, one of Margery Sharp's rarest and most sought-after novels, was her debut, reportedly written in one month while Sharp worked as a typist and shared a flat in Paddington with two other girls. But it already shows all the charm, humour, and sophistication that characterizes Sharp's beloved later work. First published in 1930, it has, inexplicably, never been reprinted. Until now. This new edition features an introduction by twentieth-century women's historian Elizabeth Crawford.

'A first novel of quite unusual charm, pointedly and gracefully written, and whimsically human' Yorkshire Post