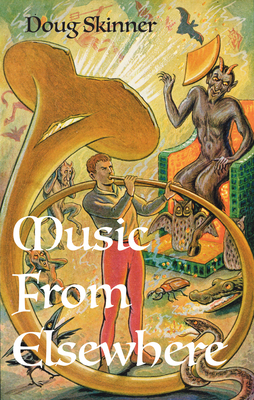 Haunting Tunes from the Afterlife, Alien Worlds and Occult Realms

A compendium of other musics, channelled from the spirit world, the fairy kingdom, outer space, secret societies and occult lodges.

Each entry contains an explanatory text on its origins and purpose, and also reproduces the musical notation, in facsimile where possible, so that you can play along at home.

An in-depth introductory essay by musician, historian and collector Doug Skinner rounds out this wondrous musical cabinet of curiosities.

Doug Skinner has contributed to The Fortean Times, Cabinet, Fate, Weirdo, Nickelodeon, and other periodicals. In addition to his books of stories, comics, music, his translations of Alphonse Allais, Charles Cros, and Alfred Jarry, he has also written many scores for dance and theater, most conspicuously for Bill Irwin's The Regard of Flight, which toured for decades. TV and movie appearances include Ed, Crocodile Dundee II, several of George Kuchar's videos, and a smattering of commercials.
Loading...
or support indie stores by buying on