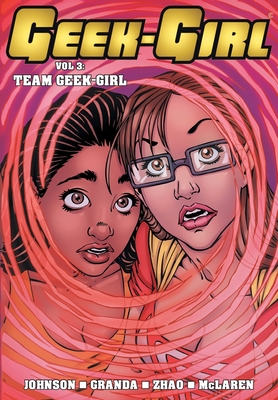 On a drunken whim, hot popular college PR co-ed Ruby Kaye landed a pair of super-tech glasses from her college's resident brainiac. Her BFF Summer James kind of pushed her into being a Super-Hero (jokily giving her the moniker 'Geek-Girl, ' following Ruby's klutzy actions while trying to demonstrate her newfound abilities to their clique).

Ruby took down mysterious Super-Villain Lightning Storm but, in the process, got electrocuted and put in a coma. Summer briefly filled in as Geek-Girl, before Ruby came back: and turned the tide on the crime wave that had erupted in the wake of the damage Lightning Storm did to Maine's law enforcement.

This has led to former super-tech weapons dealer Johnny Carlyle inviting Ruby to front his newly-forming Super-Team... and now - things are gonna get weird...

Grade A. "Back and even better. Fans of indie superhero comics will find a winner in Geek-Girl." - Leroy Douresseaux, I Reads You.