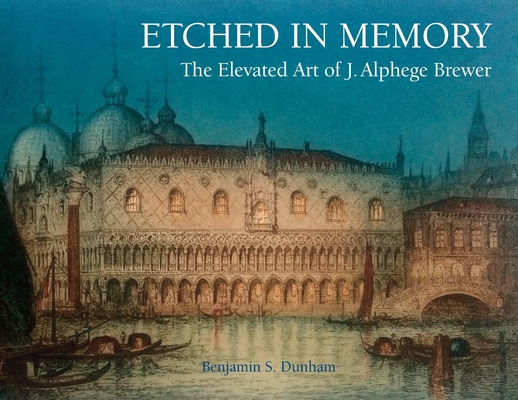 Etched in Memory - The Elevated Art of J. Alphege Brewer

This book is the first illustrated study of the life and work of J. Alphege Brewer (1881-1946), the early20th-century British artist who made his fame producing large, color etchings of European cathedrals and other historical buildings damaged or threatened during WWI. In both the United States and GreatBritain, these etchings and reproductions were proudly hung on parlor walls in solidarity with theAllied cause and as a remembrance of the devastating cultural losses inflicted by the onslaught of war.Brewer's " la poup e" technique, carried out in his shop in Acton with the assistance of family members, required the plate to be painted entirely anew for each of the authorized 300-500impressions. With the same "dab hand" at the end of his life, Brewer produced exquisite woodcuts of lakes, mountains, and other pastoral views. Chapters on Brewer's life story, techniques, and the artistic context for his war etchings are included, as well as a catalog of his known etchings.

Benjamin S. Dunham is a retired music association executive and magazine editor living near CapeCod in Massachusetts, USA. Because of a family connection to James Alphege Brewer, he began collecting his etchings in 2015 and now researches and manages a well-frequented website about the artist (www.jalphegebrewer.info). Mr. Dunham enjoyed an active career in arts administration and journalism, serving in CEO positions with the U.S. National Music Council, the American SymphonyOrchestra, and Chamber Music America and as editor ofSymphony News, American Recorder, andEarly Music America publications.