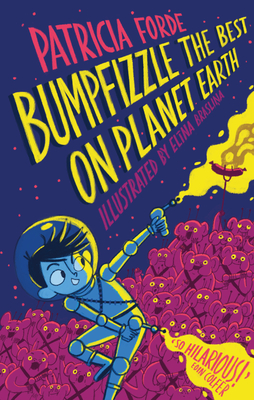 Bumpfizzle the Best on Planet Earth

A new book from the author of The List

Bumpfizzle is an alien sent to Earth on a mysterious mission from Planet Plonk. Or is he a ten-year-old boy who is jealous of all the attention his parents are giving to The Baby?

Bumpfizzle's confusion at Earthling behaviours, as reported in his diary and his frequent reports back to Plonk, are hilarious, and his adventures are ridiculous, from eating the cat's food to biting his teacher (to check if humans would make a good source of food for Plonkers) and attempting to sacrifice a goat. Elina Braslina's playful, Quentin Blake-like illustrations bring Bumpfizzle's adventures on Earth delightfully to life.

Patricia Forde lives in the west of Ireland. Her previous titles include notable book The List and The Last Lie (both published by Source Books). The List is a Library Association of America Notable Book. Elīna Brasliņa has illustrated more than twenty children's books and won many awards. She has been nominated for the Kate Greenaway Medal.
Loading...
or support indie stores by buying on