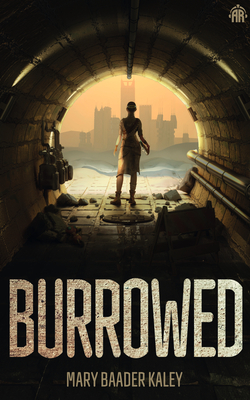 In the distant future, a genetic plague has separated humanity in two – Subterraneans who live in underground burrows to protect their health, and strong surface-dwelling Omniterraneans.

Zuzan Cayan, a brilliant Subter girl with “light blindness,” is about to leave the safety of her burrow and earn a living. With her low life expectancy, however, her options are slim. That is until she’s offered the chance of a lifetime to study the population’s broken genetic code, fix the divide and reunite the world once again.

But when a new virus turns fatal for the Omnits, Zuzan must find a cure or humanity won’t simply remain separate, it will become extinct.

With enemies on all sides, Zuzan must hold on to the light at the end of the tunnel – or risk the world falling into darkness.

"This is an intellectually rigorous story about scientific morality and overcoming obstacles, the author drawing on her experience as the mother of an autistic son to argue that through compassion and co-operation, anything is possible."
– Financial Times

"A great read for fans of postapocalyptic novels."
– Booklist

"Kaley’s debut, a cleverly crafted exploration of the morality surrounding a genetic virus, captivates with inventive science and adventure… Those who like meticulous detail and compassionate characters in their science fiction will enjoy this riveting thriller."
– Publishers Weekly

Mary Baader Kaley is a realtor in the south suburbs of Chicago with a master’s degree in Psychology. Her youngest son is autistic, and struggled with multiple health issues when he was younger, which prompted Mary to write books and give voices to characters with disabilities and other health issues. On any given day, you’ll find her gardening, reading, sneaking bites of chocolate from her secret stash, and laughing with family and friends. Burrowed is her debut novel. Find Mary online: marybaaderkaley.com / @marybaka
Loading...
or support indie stores by buying on