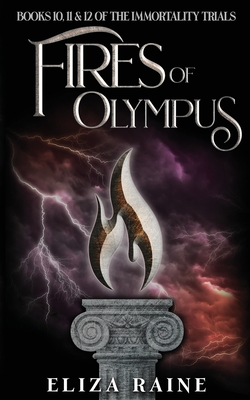 Those who survive will be celebrated. Those who win will live forever.

With just three Trials left, there's still every chance that the most dangerous man in Olympus is going to win the Immortality Trials.

If the heroes can survive the fall out from Hercules's actions on Aries, then the last Trials are to be held in the realms of the big three gods; Poseidon, Zeus and Hades, and that means the crews will have to face their toughest challenges yet.

And for Lyssa, there's not just the Trials to worry about. She's still hiding an unknown being from the gods in her cargo deck, and her desire for Phyleus may well start to turn her attention from where it should be - stopping Hercules. And when faced with the loss of her beloved ship, she is forced to make an irrevocable decision that will change both her and the Alastor forever.

Evadne knows the clock is ticking for her now that Hedone has finally made her decision. But at what point does redemption become more important than immortality? Eryx won't forgive her if she lies to him again, and would she want to live forever if she couldn't live with herself?

In this thrilling finale to the series our heroes will have to face their biggest fears, both physically and emotionally. Giant sea monsters, dragons and the deaths of those they love will see them to the gates of hell itself, before a winner is crowned. Will Lyssa win her last chance to be free and to roam the skies of Olympus for eternity? Or will she spend her remaining years fleeing a murderous monster who has been given unlimited life?

Who will win the Immortality Trials?