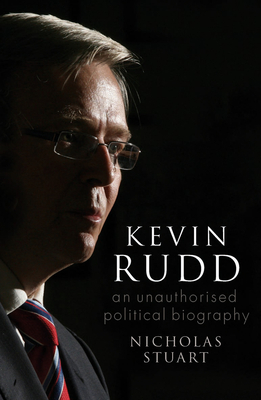 Kevin Rudd emerged after a period of prolonged instability and internal strife within the federal ALP to establish himself as a popular leader who could unify his party and mount a real challenge to John Howard. The early reaction to his leadership, from both voters and his political adversaries, suggests that he is widely regarded as Labor's best hope in a decade of ending the Howard ascendancy.

Kevin Rudd: an unauthorised political biography explores the events that have made this ambitious, self-reliant man, and the influences that have shaped his vision for the future of Australia.

Based on extensive interviews with the main participants (except with Rudd himself, who refused to be interviewed), Canberra journalist Nicholas Stuart traces Rudd's life from his childhood on a Queensland dairy farm and the family's struggle after the tragic death of his father to the present. He examines in detail Rudd's university years, his diplomatic service in Stockholm and Beijing, his political apprenticeship as Wayne Goss's chief of staff and later head of the cabinet office, his entry into federal politics and his eventual rapprochement with Julia Gillard, and the background story of his ultimate emergence as Labor leader.

Kevin Rudd: an unauthorised political biography is a comprehensive, spin-free examination of the making of this key player in Australian political life. It is essential reading for anyone interested in the future of Australia.

"I found Stuart's book quite fascinating to read. It's well written, well researched, and sensitive not only to its subject but also to the truth."  Crikey.com

"A terrific read. It's a comprehensive examination of the making of this key player in Australian political life, and no matter which side of politics you're on you'll enjoy it."  Melbourne Observer

"In Stuart's own words, his book is not a 'demolition job' but a serious attempt to understand Rudd and discover what has shaped his personality, his philosophy, and his career."  University of Melbourne Voice

Nicholas Stuart has worked for the Australian Broadcasting Corporation (ABC) in Radio News, Radio Current Affairs, and television, and was the ABC's Indochina correspondent. He is a former professor in broadcast journalism at the University of Canberra and is a regular columnist for the Canberra Times. He is the author of What Goes Up: Behind the 2007 Election.
Loading...
or
Not Currently Available for Direct Purchase