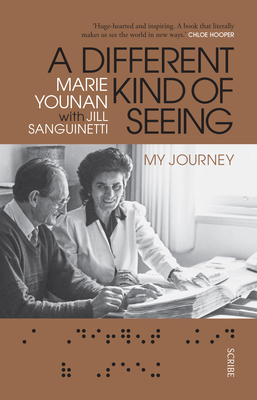 A Different Kind of Seeing

Marie Younan was born in 1952 into a family of Assyrian refugees living in north-eastern Syria. Accidentally blinded by her grandmother as a baby, Marie was the quiet, ever-present listener within her large extended family. Locked out of school, play, and social gatherings, she lived a brave inner life of reflection and acceptance.

The family migrated to Beirut, and then, in the mid-seventies, to Melbourne, Australia to escape the Lebanese civil war. Being blind, Marie was denied a visa, and was forced to wait in Syria and Athens for three years before the family could sponsor her to Australia. Unable to speak English, dependent for everything on her family, Marie, in her words, was 'only half alive'. Then, in 1985, aged 33, she attended the Royal Victorian Institute for the Blind. There she became fluent in English, literate in braille, and physically mobile with the help of a cane. Educated, independent, and professionally qualified at last, her life began to take off.