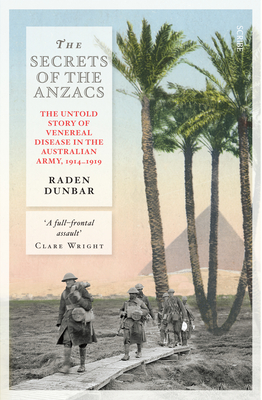 The Secrets of the Anzacs

The Untold Story of Venereal Disease in the Australian Army, 1914-1919

Here is a truly astonishing statistic: during World War I, about 60,000 soldiers in the Australian army were treated by army doctors in Egypt, Europe, and Australia for venereal diseases -- almost the same number of diggers who were killed during the war.

This silent, secret scourge took hold in Cairo in 1914, and continued until 1919 when survivors of the war waited in Europe to be repatriated. Nobody wanted to know about it, at first -- and the general public back home was, of course, kept in the dark. Moralistic commanders in Egypt ordered strict punishments for men with VD, and the young victims were sent back to Australia in disgrace, most of them inventing amazing excuses for their inexplicable return. Many of them re-enlisted, but some felt they had to change their names to do so.

Medical officers couldn't afford to be puritanical, though. They tried to prevent the diseases, as well to cure them with toxic drugs in army VD hospitals in Cairo, in England, and at Langwarrin, near Melbourne. Eventually, even the army had to face facts, and, after the AIF arrived in Europe in 1916, commanders ordered that huge quantities of prophylactics be distributed, and that safe-sex education be given as well.

The Secrets of the Anzacs reveals all these secrets, and more. But perhaps the most remarkable revelation it contains is that many of the re-enlisted men went on to perform deeds of battlefield bravery -- even, in one case, to the extent of being awarded a Victoria Cross under a false name.

This fascinating book also contains numerous original photographs, artworks, and documents, most of which have never been published before.

Raden Dunbar is a retired educator who has been a schoolteacher and principal, university lecturer, and a consultant in Australia, Indonesia, and other countries. He is the author of The Kavieng Massacre: A War Crime Revealed.
Loading...
or support indie stores by buying on